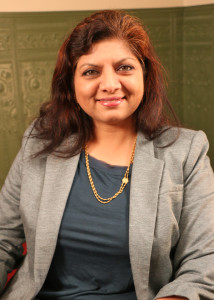 Padma Kuppa is a Hindu American and community activist working for social justice and understanding. Born in India, she arrived in the U.S. to start kindergarten in 1970 on Long Island. Returning to India with her family in 1981, she finished high school and college while living in a mainstream Hindu culture. Returning to New York in 1988 as a foreign student, she, her husband, and their two children have made Troy, Michigan their home since 1998. She is a founding member of the Troy-area Interfaith Group, as well as the Bharatiya Temple’s Outreach Committee. As a member of the Hindu American Foundation’s Executive Council, she advocates on issues pertinent to Hindus in America. She also works with WISDOM, Women’s Interfaith Solutions for Dialogue and Outreach in Detroit. Padma became Troy Historical Society Board President in October of 2018 and was elected to the Michigan State House of Representatives a month later, representing the 41st District which includes the City of Troy.