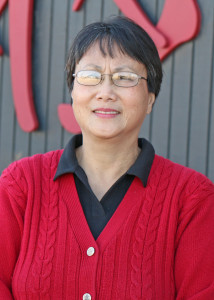 Margaret Yee was born in Canton, China in May 1955. Her immigration story starts years before when her grandfather came to the United States as an indentured servant working to build the railroad. After working off his debt to the railroad company, he worked in restaurants. While working in Birmingham he met a congressman who agreed to help him bring his family out of Communist China and into the United States. The family could not come all at once though, and it was years before they were reunited. On Thanksgiving Day 1965, Margaret met her father for the first time. Since then she earned a degree in pharmacy. After working as a pharmacist for many years she now spends her time managing the family restaurant here in Troy- Kim’s.