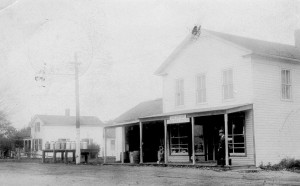 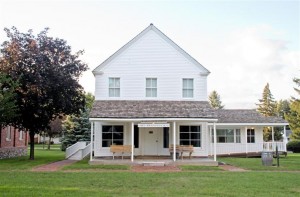 The General Store at the Troy Historic Village is not a vintage building, but a representation of a store that stood on the northeast corner of Livernois at Square Lake Road as early as 1832. The first Troy Corners store was owned by Edward Peck. Franklin (Frank) Cutting was listed as the owner after 1882, but it’s believed that he had managed the store for some years before that as the son-in-law of the previous owners, the Goodman family. For many years, the store also served as the community’s post office. Records indicate that the store owners often served as the postmaster.

Between 1898 and 1931, the General Store at Troy Corners was also a ticket office and waiting room for the Detroit United Railway or DUR. The DUR was a system of electric trolley lines that ran between Detroit and many towns in southeast Michigan including Royal Oak, Port Huron, Ann Arbor, Flint, Romeo and Almont. The line from Royal Oak to Rochester ran north on Livernois to South Blvd., and then east to Rochester Road where it turned north. One stop on that line was Cutting’s Store. In addition to transporting passengers, some of the 45-foot long cars carried freight including agricultural products and milk. The DUR provided electric mass transit that connected Troy to Detroit for over 30 years.

Between 1989 and 1990 a clapboard building that closely resembled the store at Troy Corners was built in the Troy Historic Village. It was funded by the City of Troy and the Troy Historical Society.  In addition to providing valuable exhibit and teaching space, the second floor of the building serves as the Village archive. It houses thousands of documents, ledgers, print records, photographs, daguerreotypes, and the Village’s extensive textile collections.

Compare these photos of the original General Store and the building in the Village. Can you see how they are similar and different?

The General Store at the Troy Historic Village