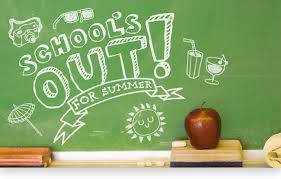 A practical reason for establishing summer break for students during the 19th century was to ensure that farmers’ children were available to help plant, tend, and harvest crops. Children returned to school when the harvest was in the barn or hauled to market.

As America became an industrial nation and school attendance became compulsory state by state, the tradition of summer vacation remained. Children left school in June and returned to the classroom around Labor Day (see yesterday’s 365 Story.) As American worker benefits increased and paid time off became a reality in the 20th century, the family vacation became a summer tradition and the tourism industry boomed. In prime vacation areas like northern Michigan, longer summer seasons were economically advantageous. Less than ten years ago the Michigan Legislature enacted State Statute 380.1284 that prohibits school from starting before the Labor Day weekend to support the tourist industry.

Conversely, educators argue that to be competitive in the global community, students need to spend more time in the classroom. A longer school year with a number of short, interspersed breaks maximizes attention spans and learning potential.  In 2015 the Michigan school year will include 180 days, with administrators juggling time for snow days, mid-term breaks, and holidays. There is a movement in the state to pass new legislation allowing districts to set school year parameters locally as long as Labor Day remains a 4-day (Friday through Monday) break to support the tourist industry.

So historically and today, school attendance, the duration of the school year, and the school calendar have all been heavily influenced by the economic needs of the community and economic potential of the citizens the school system will produce.