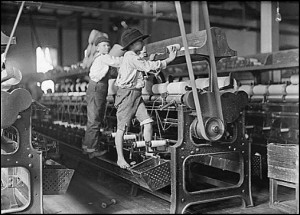 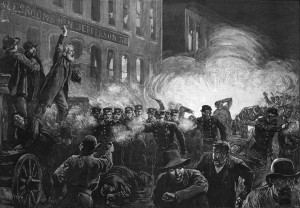 Today Americans celebrate Labor Day as a three-day weekend that officially marks the end of summer vacations, touches off a flurry of back-to-school sales, and brings families together for a barbeque. But the origin of this holiday that celebrates American workers is rooted in a long, difficult, and bloody struggle for basic worker rights.

During the Industrial Revolution thousands of men, women, and children as young as five years old, found work in textile mills, factories, and mines. They worked 12-hour days, seven days a week, for minimal pay. Working conditions were generally unsafe, unsanitary, and unhealthy. In the late 19th century workers began to organize and demand better pay and improved work environments. On September 5, 1882, 10,000 workers assembled for the first Labor Day Parade. They sacrificed their wages that day to march from City Hall to Union Square in New York City. Protest rallies evolved into strikes to force employers to the bargaining table and strikes became increasingly violent. During the Haymarket Riot of 1886 several Chicago police officers and protesters were killed.

Child laborers in the 1800s

Engraving of the Haymarket Riot