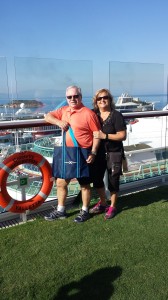 Andrea and Henry Allemon love to travel, especially on cruises. But before their next getaway, they have a couple of volunteer efforts to fulfill. First there’s the Walk for PKD on September 12 at Boulan Park for the Kidney Foundation and then they have to work the O’Daze Tavern hosted by the Troy Kiwanis Club at next weekend’s Troy Family Daze celebration. Were it not for Henry and Jim Cyrulewski there wouldn’t be a Troy Family Daze in Troy. When the original festival ceased because of lack of financial backing, Henry and Jim rounded up a few fellow volunteers and started it up again in 1981.

Why do they volunteer? “It keeps you young; it keeps you active,” Henry observes. “It’s a great way to network, too.”

“It keeps you in the know,” Andrea adds, “and I like meeting new people and helping different organizations.” Andrea was a young widow with three sons, Tony, Paul, and Robert Alati, when she met Henry. They married in 1978 and have busy volunteering for a host of charities ever since.

Henry’s first volunteer efforts date back to his school days and the paper drives where kids collected their stash in a wagon. He moved to Troy 53 years ago to work for then Troy National Bank, which would evolve into Michigan National Bank. That first branch was at the corner of Livernois and Maple, converted from a gas station, and is now the Red Wagon Wine Store, but it’s still the same building. “There was nothing here,” Henry recalls of Troy with a grin.

Andrea started volunteering early, too. During high school in Okemos she volunteered at the Michigan School for the Blind and even read stories to Stevie Wonder. After earning her degree at Michigan State University in social work it was on to the big city, Detroit.

Both have been active volunteers at St. Anastasia Catholic Church, Troy Youth Soccer, Athens Athletic Boosters, the Troy Chamber of Commerce, the PKD Walk, which Henry has chaired, and Cub Scout Pack 1707 where Henry was treasurer, and now volunteers for their grandsons, Dylan and Brandon Alati, the family’s newest Pack members. Henry is the oldest – not by age but by length of membership – active member of the Troy Kiwanis Club, where he’s served in just about every office  and is always ready to step up and take on a new program that needs chairing.

Many, many Troy residents and business bought their tickets to the Troy Boys and Girls Club’s annual Taste of Troy fundraiser from Andrea, who as ticket chairman for 16 years and on the Board of Directors for 13 years. And, everyone in Emerald Lakes Village Subdivision (and lots of her other acquaintances as well) know that if they need home repairs, Andrea can point them to the right sources. She’s been on the subdivision’s board for 38 years. Their lovely home has also been featured on annual gardens walks for both the Troy Garden Club and the Evening Primrose Garden Club. One has to wonder when they find time to garden.

For their efforts to make Troy a better place to live and work, both have been honored as Troy’s Distinguished Citizen, Henry in 1984 and Andrea in 1999. She was also named Italian American of the Year by the Italian Study Group of Troy. It sounds like they deserve a vacation, perhaps another cruise.