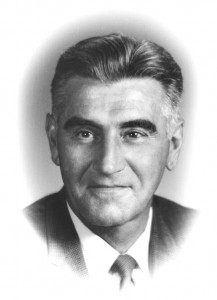 Jule R. Famularo followed Vince McAvoy as mayor. He served two consecutive terms from 1968 to 1974. He has the distinction of being the only Troy mayor to resign from office. Famularo submitted his letter of resignation in April 1971, citing philosophical differences with the City Commission. The mayor supported the expansion of commercial and apartment zoning to increase Troy’s tax base when a majority of the commissioners believed the city should adhere to the existing Master Plan. A group of homeowners and businessmen quickly organized a campaign to support the mayor. In one week the Friends of Famularo collected 1,387 signatures and petitioned the commission not to accept his resignation. The following week, the commission formally rejected the resignation and Commissioner John Kokalis asked Mr. Famularo, “Mayor, will you resume your seat?” After thinking for several seconds, the mayor shook hands with the commissioner and resumed his official duties.

Famularo, a native of London Ontario, was born on October 27, 1913. He earned a BA in law and philosophy from the University of Detroit before establishing Famularo & Associates Insurance Co., which he operated for 35 years. In addition to his service as the mayor of Troy, Mr. Famularo was a member of the Elks, the Moose Lodge, and the Eagles. He was a co-founder of both the Boys and Girls Club of Troy and Troy Kiwanis, and an active member of St. John the Evangelist Catholic Church and the Knights of Columbus. Additionally, he served on the Board of Directors of the Madison Heights Community Hospital.

Jule and his wife Pauline, known by many as Midge, had six children, 21 grandchildren and 25 great-grandchildren. He passed away on October 16, 2001.