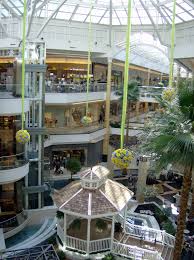 The Somerset Collection is one of the region’s known retail destinations. This is the second in three 365 Stories focused on Troy’s Somerset North and South and the Skywalk across Big Beaver Road which links them.

Plans for Somerset North, initiated as early as 1989, progressed slowly.  Sam Frankel and Forbes/Cohen recognized the potential of a second retail facility on the north side of Big Beaver, but did not want it to compete with Somerset Mall. In the early 1990s the City of Troy formed a committee envisioning the City’s future. They agreed that expanding Somerset and adding lanes and a boulevard to Big Beaver Road would draw new residents, businesses, and visitors to the City.

After years of negotiations between Forbes/Cohen, Frankel and Associates, and City leadership, an agreement was reached. Troy City Council established a Downtown Development Authority in 1993 (see 365 Story on September 20) and used federal transportation dollars and DDA tax dollars to improve Big Beaver Road and build the Somerset North Parking Deck. Forbes/Cohen and Frankel constructed Somerset North– 940,000 square feet of retail space on three levels– which opened in 1996. With Nordstrom and Hudson’s as anchors at either end of Somerset North and Saks and Neiman Marcus established in Somerset South, the elegant facility offered unique shopping experiences for a wide range of clientele. (Within the next decade, Hudson’s was acquired by Marshall Fields and then converted to Macy’s.)

Somerset Collection shoppers park their vehicles in the 4,000-space parking garage, which was specially designed so that the parking levels align with the levels inside the mall. A skywalk also provides a convenient link between North and South stores and restaurants. (The Skywalk is the subject of tomorrow’s story.)