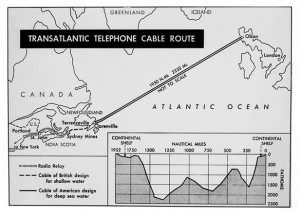 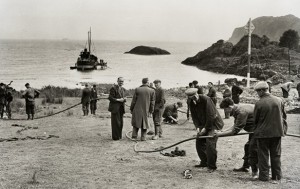 On September 25, 1956 the Chairman of the American Telephone and Telegraph Company (AT&T), in New York, spoke with the Postmaster General of Britain, in London, over the newly-completed, first transatlantic telephone cable. Scientists and engineers had begun to study deep-sea, long-distance submarine cable transmission of telephone calls in the early 1930s. Telegraph cables had successfully carried transatlantic messages since the 1850s, but voice signals were not strong enough to travel across the ocean. Engineers realized that they needed to find a way to increase the strength of the voice signal. They accomplished their goal with the creation of the repeater – an amplifier that could be wired into the cable at intervals.

Planning, designing, manufacturing and installing the system took three years of joint effort by AT&T, Bell Telephone Laboratories, the Canadian Overseas Communications Corporation, and the British Post Office Engineering Department. Two cables were laid, one for each direction of communication. Laying the cables took weeks and was carried out over two summers, to avoid Atlantic winter storms. The cost was $42 million, $367 million in 2014 dollars.

The first cable provided thirty circuits between the U.S. and Britain and six between Britain and Canada. Some of the British circuits were also connected through to systems in Europe.

Before the installation of the cable, international calls by radiotelephone had been possible since 1927, but the cost was so high that, in 1955, only 100,000 calls were made in a year. The first year of cable service, the number of transatlantic calls more than doubled: 220,000 calls were made between the U.S. and Britain and 75,000 between Britain and Canada. Today, residents of the United States place 500,000 transatlantic calls a day.