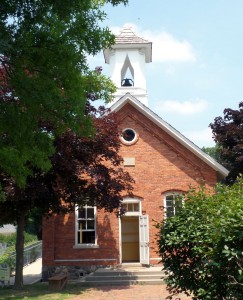 Our July 5th 365 Story focused on the history of Poppleton School. We received a lot of comments and questions following the story including “When was the last class taught in the old building?” Recently this article was found while I was reviewing files donated to the Village archives by Dorothy Scott’s estate. It is a Troy Eccentric article from 1978. We hope that those curious about Poppleton will enjoy it. We also thank all 45 “Poppleton Kids” who attended the annual Poppleton Reunion in the Village on September 10. As an FYI, next year’s reunion is already on the calendar– September 8, 2016.

One-hundred-and-one years after it opened, Poppleton School will close, and its original structure, a one-room schoolhouse, will stand only as a reminder of a smaller, quieter Troy.

Thursday, however, the school was noisy with excitement as Poppleton’s last class of fifth graders celebrated their graduation with cake and ice cream. They looked forward to moving onto a higher grade and out of a school in which so many had been taught the 3 Rs.

Carl Cohen, president of the school’s parent group and school board trustee, figured that at least 10,000 students had passed through Poppleton’s doors.

This day, two fifth grade classes totaled 57 students, all dressed for the occasion, finally calmed when Cohen spoke and told them of their specialness.

“This year is more sentimental to us than other years,” said Cohen, noting the end of “101 years of educating students.”

Next fall, Poppleton students will attend the brand-new Bemis Elementary and the one-room school potion of Poppleton will eventually become a museum. The larger and new Poppleton building will be put up for sale.