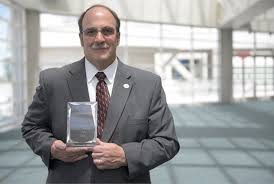 Sam Lamerato has guided Troy’s Fleet of vehicles into the 21st Century. When he joined the City of Troy as an intern in 1974, Sam never intended to make the City’s Fleet Department his career for 41 years. He actually planned to learn a bit more in Troy and one day open his own repair shop.

To be honest, Lamerato, as the Superintendent of Fleet Maintenance since 1983, has made the Troy Department of Public Works his own in every respect. Widely respected in the industry, he was named to the Fleet Manager Hall of Fame in 2011 by Government Fleet Magazine and was the first person elected as a Legendary Fleet Manager in 2014. The City of Troy captured the title of Fleet of the Year in 2010 and has been named an Elite Fleet every year since. These honors have come despite the fact that Troy competes against fleets which are ten times the size of Troy’s fleet based on budget, personnel, and equipment.

Sam Lamerato has also made the 16 bays in Troy maintenance center the place 15 other cities, school districts, Oakland County, and even churches come to for help to keep their own fleets in top running order. However, work on Troy’s 500 pieces of equipment is always the top priority. Sam expanded services to other communities when he saw the economy faltering a few years ago, and observed that other cities were having trouble keeping their fleets on the street. Troy stepped in to help by offering service contracts to maintain the fleets of other groups.

Troy’s Fleet operations weren’t always legendary. Lamerato was hired the day he graduated from MOTECH Automotive Education Center and went to work as technician. He found the day shift a bit boring and credits his supervisor, Fred Green, with giving him the opportunity to expand his skill set on second shift. He also has high praise for those who ran the city in the 1970s and ’80s, including DPW director Don Spurr, City Manager Frank Gerstenecker, Mayor Dick Doyle, and City Engineer Dick Graham.

“They saw what was coming for Troy and wanted to stay ahead of what was coming downstream…They invested what it took for Troy’s growth and invested the dollars needed in what was going to carry them into the future.”

That meant constructing a new DPW building, and providing the Fleet Division with the financial resources to hire the right people and purchase the right equipment, to keep our police, fire, and snow removal equipment all in top running order.

Lamerato is proud of the staff at the Fleet Division, noting that Troy is the only municipality in Michigan whose fleet is ASE-certified, meaning that at least 75 percent of the employees have certification. Troy’s employees also tend to stay with the City a long time. Lamerato advises everyone to treat the employees like family and make sure they have the tools and equipment to do their job. “Employees have a lot of great ideas, and customers do as well,” he said. Sharing ideas is his part of his philosophy.

In fact, Lamerato founded the Southeast Oakland County Fleet Managers Association. He knew other fleet managers in the area had a lot of experience that he could learn from. Today, he’s among those giving the advice.

Sam credits his dad, John Lamerato, who worked as general manager at the Southeast Oakland County Water Authority for his management style. He always advised his children “to put their best foot forward, follow trends so you’re one step ahead of the game, keep positive, always be professional and ethical, and don’t settle for good enough when good enough isn’t.”