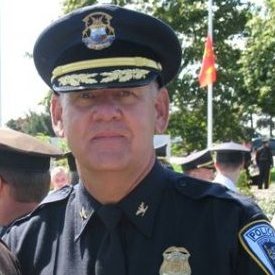 Charles “Charlie” Craft served on the Troy Police Department for 29 years, rising through the ranks to Chief of Police on April 13, 1998. He retired on February 23, 2009.

Although Charles was born in Jenkins, Kentucky (1952), his parents Ted and Catherine Craft relocated to Hazel Park, Michigan when their son was very young. Charlie graduated from Hazel Park High School and then earned a BA in Secondary Education at Wayne State University. He pursued a teaching career but found work as a substitute rather than a full time job. Following a bomb scare at one school, he decided to change careers and become a police officer.

After graduation from the Police Academy, Craft worked for the Clawson Police Department for three years. He moved to the Troy Police Department on August 4, 1980. On that day he met a Police Service Aide named Janine. She would become his wife a year later.

Charles Craft had a distinguished career in Troy. He was selected Troy’s Police Officer of the Year in 1986. Following his promotion to sergeant and later lieutenant, he supervised and managed Patrol Operations, Criminal Investigations, Criminal Intelligence, Special Operations, and Internal Affairs. As a captain he commanded the Patrol Division and the Criminal Investigations Division and gained recognition for his positive management style.

Former Mayor Jeanne Stine composed a poem for Chief Craft, which she read at his retirement party. In one stanza she stated, “Janine will tell you Charlie has a Servant Heart, like a doctor, a priest, or a teacher: you can’t tell them apart.” Indeed, Chief Craft was highly respected for his integrity and commitment to public service.