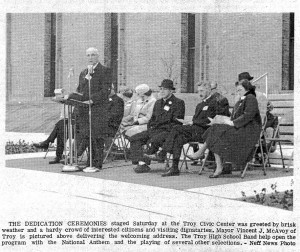 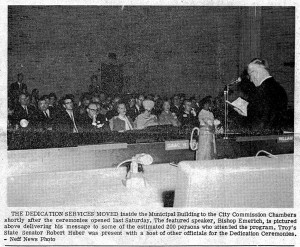 After Troy was incorporated in 1955, the City’s population and its demands for City services grew quickly. By November 1966 the number of residents had nearly doubled from the 1955 census count of 13,673 and the City staff had outgrown the modest space provided in the old 1927 Township Hall.

A Building Authority chaired by Welling Akin worked several years on the plans, financing, and construction for a new City Hall located on the 89-acre Civic Center site on Big Beaver Road. Construction was started on May 8, 1965 and the building was open for business on September 19, 1966. The original 2-story structure, designed by architect Frank Straub and Associates, included 30,000 square feet. The modern building featured terrazzo floors and Council Chambers with fixed theater seating. The cost for the project was:

The formal dedication of City Hall was held on November 12, 1966 at 1:15 pm. Mayor Vincent McAvoy welcomed Rev. Richard S. Emrich, the Episcopal Bishop of Michigan who gave the dedication address.

Mayor McAvoy and dignitaries at the November 12, 1966 dedication

Bishop Emrich provided the keynote in Council chambers for the dedication