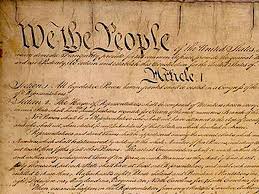 The participants were excited, as they prepared to play their parts in Troy’s Celebration of the Bicentennial of the U.S. Constitution, twenty-eight years ago today, but no one had any idea how exciting the evening would turn out to be.

The Troy Constitution Bicentennial Committee, chaired by Troy City Councilwoman Louise Schilling and Troy School Board Trustee Tom Kaszubski, had been planning the celebration since 1986, as part of the nationwide observance of the two hundredth anniversary of the ratification of the Constitution. The event was sponsored by the Troy Bicentennial Committee, the City of Troy, the Troy School District and The Budd Company.   A tent had been set up on the green at the Troy Historic Village, for the 7:00 p.m. ceremony. The Troy High School and Athens High School bands provided patriotic music, and the Troy Historical Society offered refreshments.

Many dignitaries were in attendance, on the beautiful autumn evening, and they were seated in the tent’s front row. After the singing of the Star Spangled Banner and the Pledge of Allegiance, Councilwoman Schilling introduced these special guests, and then she spoke about the Constitution and the nationally celebrated anniversary.  Student government leaders from Troy High School and Athens High School were taking turns reading sections of the Constitution, when an unexpected thunderstorm suddenly rolled in.

Rain sheeted down, flowing down the tent and into the collars of the special guests in the tent’s first-row. Mrs. Schilling grabbed the flag and the giant poster of the Preamble, which had been created to record the event and the signatures of attendees, and the crowd raced into the nearby Poppleton School. Undaunted, and without prompting, the students took up reading their sections of the famous document, in their new setting, until they were interrupted again – this time, by the tornado warning siren.

The participants quickly took shelter in the basement of the sturdy Old Township Hall building, and, as soon as the students were settled, they began their readings yet again. The gathering continued in the Township Hall basement until the “all clear” was sounded. The Preamble was taken to the Troy Public Library, to provide the opportunity for residents to sign it without getting it soaked and muddy. And, when the final report was issued, recounting the Bicentennial celebrations that had taken place across the nation, the report of Troy’s observance was as distinctive as the event was memorable!