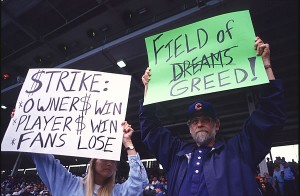 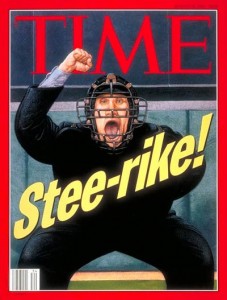 The World Series was cancelled on September 14, 1994. This was only the second time in the history of Major League Baseball (MLB) that the fall classic was not held. In 1904, the Series was cancelled because of business rivalries between the National and American Leagues and a personal dispute between manager John McGraw of the New York Giants and Ban Johnson of the Boston Americans (now the Red Sox.)

The root cause of the baseball strike in 1994 was money. Before 1975 MLB contracts contained reserve clauses that tied players to their teams, perhaps for their entire careers. There were no free agents. As a result, player salaries were kept low. When the reserve clause was eliminated in 1975 and players could negotiate with different clubs, salaries increased dramatically as teams vied for talent.  Between 1985 and 1988 the owners secretly conspired to control salaries and hold down expenses, but were fined $280 million as the result of a lawsuit by the players’ union.

The relationship between MLB and the Players Association remained strained for the next six years. During collective bargaining for a new agreement in 1994, owners were adamant that revenue sharing to maintain equity between large and small market teams be tied to salary caps. The players would not accept salary caps under any circumstances. On August 12, 1994, the owners locked the players out and a 232-day strike began. More than 900 games and the entire post-season were canceled.

When the strike was called the National League’s Montreal Expos (74-40) and the American League’s New York Yankees (70-43) were in first place. Many sports analysts felt the Expos would have won the World Series if it had been played. Unfortunately, due to lost revenues incurred during the strike, the Expos were forced to trade away their best talent and struggled for the next ten years. In 2004 the team was moved to Washington D.C. and became the Washington Nationals.

The Baseball Strike officially ended on April 2, 1995 and professional baseball players returned to work with the ability to negotiate as free agents.