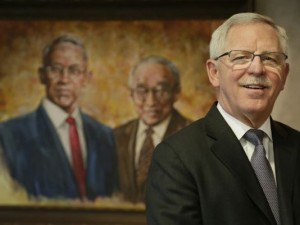 The third-largest bank in Michigan, Talmer Bancorp, is based right here in Troy.  Since being established in 2008, Talmer, built on service, integrity and community, has embodied its service-oriented culture.  The name of the bank, Talmer, is a combination of the principles’ maternal grandfather’s surnames.  Dave Provost’s grandfather was Talmage (a missionary) and Gary Torgow’s grandfather was Merzon (a lawyer). Though the two men never met, they shared a common purpose – to help others and to enrich the lives of their communities. Through its acquisitions over the years, Talmer has given many great, but struggling banks and their employees a second chance and helped reignite their communities. Over the past several years, it has been able to retain hundreds of regional jobs, restore customer confidence, and continue to give back and support local initiatives. Talmer is moving forward in a position of strength to not only provide financial solutions to its neighbors and local businesses, but to deliver on its commitment of community, integrity and service.

Talmer has had and will continue to have a positive economic impact on Troy and its surrounding communities.  In Troy alone, there are more than 500 employees in its headquarters and banking centers providing jobs that contribute to the local economy, and in turn, other businesses in and around Troy.  And through its Corporate Social Responsibility program Talmer has contributed to numerous local organizations in the areas of Health and Wellness, Human Services, Education and the Arts.

Talmer employees also support Troy through volunteerism, whether it’s hosting fraud prevention programs or working with the local Boys & Girls Club, through work with the Troy Chamber of Commerce, to sponsorship of its local initiatives, Talmer and its employees are here and making a difference.