House History:
The Niles-Barnard House is bookends for Troy history. The original 1 ½ story home was built by pioneer Johnson Niles’ family in 1837 on land that is now the southwest corner of Livernois at Square Lake Road. Niles is credited with naming the community Troy. Within 25 years, according to historic preservation architect Gene Hopkins, the Niles family completed a large 2 story addition that was likely used as a public house or inn. There is a reference regarding the public house in the 1877 History of Oakland Countyplus structural and archeological evidence to support this use of the house.

In 1939 Norman Barnard, a young attorney, learned that the old Niles house was being sold for back taxes. He purchased it for $1,000, remodeled the worn interior and married his sweetheart, Harriet Kyser, in the living room. He and Harriet raised their six children in the home.

In 1955, while Norman was Troy’s Township Supervisor, the citizens committee for home rule incorporation sat at the Barnard’s dining room table and crafted plans to establish the City of Troy. 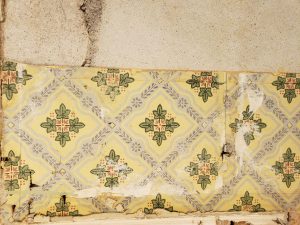 Layers of wallpaper in different main floor rooms covered panels of deteriorated fiberboard and the original horsehair plaster. Much of the plaster in the house is less than a ¼ inch thick and is crumbling. The construction team and their structural engineer will determine how much of this original material can be saved and what should be repaired or stabilized because it contributes to the structural integrity of the exterior walls. 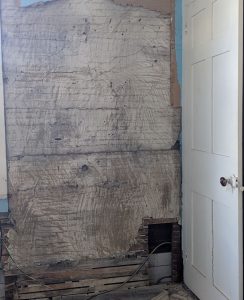 What is horsehair plaster?

Horsehair plaster is a mixture of lime, sand, plaster, and small pieces of hair commonly cut fromthe manes and tails of horses. These horse hairs are strong flexible strands of protein and when they’re mixed with plaster, they provide structural strength. While ox, donkey or goat hairs were also used, horse hairs were considered the most flexible. 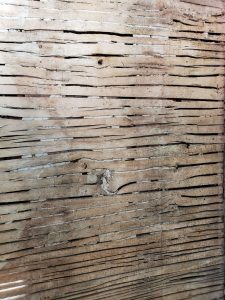 The lath in the house was hand-split with a hatchet, resulting in an irregular board that was expanded like an accordion and nailed to the studs. Wet horsehair plaster was pressed on to the lath and oozed between the splits before hardening, forming a permanent “key,” or attachment.

After 1830 sawmills equipped with new circular saws produced lath by cutting boards into thin, uniformly-sized strips with visible saw marks. However, hand-split lath was still used in rural areas like Troy Township. Machine-cut lath remained the standard into the 20th century, when drywall began replacing plaster as the wall covering of choice.

A treasure in the wall

The City’s gift agreement with Harriet Barnard’s estate clearly states that any coins, money or objects of value found behind the walls or under the floors shall be returned to the Barnard family. When the 1950s ceiling tiles were removed about 150 walnut shells from an old squirrel stash tumbled down on the demo crew. Fred Barnard said we could keep them.

Then, a week ago Rick Cedroni found this bit of newsprint when he removed a piece of fiberboard. The first notice dated Feb 26, 1826 reports that Detroit merchant John Palmer moved his wares to a new location. A second more detailed notice lists the merchandize available for cash or barter at a store owned by Detroiter F.P. Browning as of Nov __, 1825. Through this scrap of paper we have added to the genealogy record; learned a bit about the economy of Detroit 194 years ago; the quality and type of paper used in 1820s newspapers; and that Johnson Niles had newspapers and used them as insulation in his house. Value and treasure can be measured in many different ways.