The Orlando featured in today’s post is known not only for his Civil War service, but also for his Great Lakes shipping legacy. How he got there from his beginnings in Ohio was part opportunity, part tenacity, and part recognition of his skills. 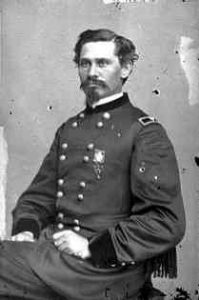 Orlando Poe
Orlando Metcalfe Poe was born in Navarre, Ohio in 1832 to parents Charles and Susannah. He was little distinguished from other school-going Ohioans until in 1852, when he earned an appointment to West Point, replacing another young man. Months after going to the military academy, Poe’s father died, and he came home expecting to have to provide for his family. They, however, proved resilient enough to allow him to return to his studies, which he did, struggling to catch up. 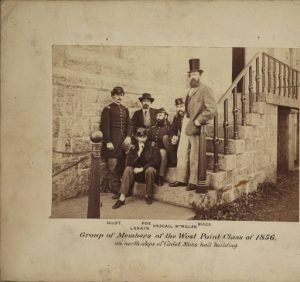 His abilities and perseverance were such that Orlando M. Poe graduated 6th from the West Point class of 1856. From there he served as a topography engineer in the upper Great Lakes until the outbreak of the Civil War in 1861, when he returned to Ohio to help organize recruits. As a Lieutenant, he was sent to join General George McClellan, and took part in one of the early small victories of the Federal effort at the battle of Rich Mountain.

With Sarah, Annie, and the 2nd Michigan
Poe was then given command of the 2ndMichigan Infantry as a Colonel of Volunteers under the newly promoted Brigadier General, Israel Richardson of Pontiac. The 2ndMichigan Infantry included individuals like Sarah Edmonds, in the guise of soldier Franklin Thompson, and Annie Etheridge, who with the 2ndMichigan began her long service as a vivandière, also known as a sutler or canteen keeper. Also among Poe’s comrades in the 2ndMichigan was Charles B. Haydon, whose eyewitness account of the Civil War was published (very!) posthumously in 1993, many years after his death in 1864.

To Poe’s credit are several battles in the east, including Bull Run, Williamsburg, and Fair Oaks. He was put forward for a significant promotion, but Congress declined to approve the appointment. In 1863, Poe’s rank reverted to the regular Army rank of Captain of Engineers. He was then sent west. This reassignment soon had Captain Poe associated with the 1st Michigan Mechanics and Engineers (1st MI M&E)

Marching to the Sea
It was General William T. Sherman who requested him. Poe was designated to oversee the destruction of parts of Atlanta deemed useful to the Rebel cause. As author Mark Hoffman described it in My Brave Mechanics: The First Michigan Engineers and their Civil War (2007), “One of the major landmarks to be destroyed was a large brick seminary. Poe agonized over the building’s destruction, noting in his diary the ‘desire to save the building but fear it will be impossible.’”

After Atlanta, there was the “march to the sea” for Poe and the M&E troops he requested. This march covered 285 miles and involved very little fighting. Roads and bridges were built to move 62,000 men across hostile territory. The work of constant motion, living off the land, and ruining railroads, warehouses, and factories was wearying. The six-week march was rewarded with the final easy capture of Savannah and a chance to stay in place. The engineers were tasked with building “Poe’s Line” of defense for the garrison left behind to occupy Savannah; it took three weeks. They left beginning January 26, 1865.

Sherman, Poe, and the 1st M&E then moved on to the Carolinas. The swampiness of the terrain and the many river crossings proved very challenging. There were fewer things worthy of destruction, and plenty of help to ruin the portions of the South Carolina Railroad they encountered.

Lighting the Great Lakes
After the war, Poe stayed in the Army and was appointed to the U.S. Lighthouse Board. In 1870, he was put in charge of lighthouse construction in the Upper Great Lakes. The “New Presque Isle Light” was finished in 1870. It has many distinctive features that are considered “Poe style.” All nine of the lights that Poe designed and oversaw the construction of are still active. These include island lights at South Manitou and the Apostle Islands, a Wisconsin light at Wind Point, and Grosse Point Light in Evanston, Illinois. 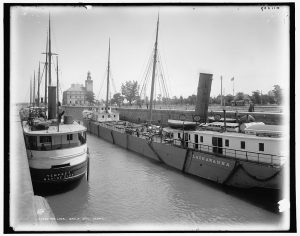 In 1883, a new challenge came with Poe’s reassignment to improving harbors and rivers of Lakes Superior and Huron. The grandest part of his legacy is named the “Poe Lock” at the rapids of Sault Ste. Marie. The lock’s tremendous size made it the largest of its day. Before it opened, tragedy struck. During a September 1895 inspection, Poe suffered a fall that broke bones and left him bedridden. General Orlando Poe died October 2, 1895. Visitors today would find an improved and enlarged lock, constructed in the 1960s. This lock continues to carry Orlando Poe’s nam