The Pleasures of Research
To me, one of the great pleasures of researching any subject is to move beyond the larger story and delve into the numbers and details behind it. In this case, a look into some Civil War figures revealed several who only shared (at the outset, anyway) the name “Orlando” and an association with Michigan. One Orlando gave a classic response to a surrender demand. A second is known for his contributions to Michigan’s engineering works after the end of the war. All those featured in this 3-part series survived their service.

With Orlandos in mind,I turned to the Sons of Union Veterans’ Graves Registration Database, which lists the known resting places of Michigan soldiers who fought for the Union. The SUVCWMI search engine has one very useful feature: type in “Orlando” as a first name, and you’ll pull up 103results–no last name needed! From these 103 possibilitiesare 90-plus men, once duplicates are removed. 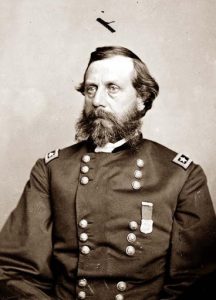 Orlando Willcox
Today’s post focuses on Orlando Willcox, anearly leaderof Michigan’s troops, with army service that eventually spanned more than 40 years. He named his son “Elon Farnsworth,” after an army colleague. At Alexandria, VA, Orlando saw action in May 1861 (in a war that started in April). Later, hewas detained as a prisoner of war. Upon his release he was promoted, and he returned to army service. Decades after the Civil Warended,he received high honor.

Detroiters of 1860 would likely recognize Orlando Bolivar Willcox, who was born in Michigan’s largest city in 1823. Hewent to West Point and graduated in 1847. He then served in the US Army as the Mexican War was closing and was subsequently stationed in New Mexico to fight Indians on the western frontier. Willcox also served a couple years as an officer in the Third Seminole War (1855-1858) in Florida, fighting the Native Americans there. (If you are Seminole or Apache or find yourself sympathetic to Native American resistance in the 19th century, you might look upon his service in a different light!) Upon his return to his Michigan birthplace in 1857, Willcox became a lawyer.

Thank God for Michigan
Lawyers, farmers, mechanics, businessmen, and more soon found a new calling. In April 1861 when President Lincoln called for troops to preserve the Union, Detroit reacted. In a great show of patriotism, Michigan formed its 1st Infantry regiment* very quickly. Detroit’s own Orlando Willcox was appointed Colonel of the men who enlistedfor 90days of service. The 1st MI Infantry arrived in Washington City,as the home of the US Capitol was then known,on May 16, 1861. Lincoln looked out the window to see a fresh regiment marching into town. When informed where they were from,PresidentLincoln said, “Thank God for Michigan!” The first of the “western” troops had arrived to defend the nation’s capital.

Federal and Confederate troops alike spent the next two months training for combat. The first major battle took place near Manassas, Virginia, on July 21,1861, astride a creek known as Bull Run. Orlando Willcox and the 1st Michigan were tasked with battle at an area known as Henry Hill, making it farther south than any other Union troops that day. Willcox was wounded in the arm and unhorsed; Captain William H. Withington of Company B stayed with Willcox to relay his orders and care for the 1st Michigan’s injured leader.

In the chaotic retreat that followed, the wounded Willcox and Withington were cut off and captured. About 1,000 Union soldiers met that fate at Bull Run, including one Congressman from New York.

A Guest of the Confederacy
Captain Withington was released in January of 1862. He returned to service with a promotion to Colonel and was assigned to the 17th Michigan Infantry. Willcox, on the other hand, stayed as “a guest of the Confederacy” until August of 1862, more than one year after his capture. After a quick visit home to Detroit following his release, the newly promoted Brigadier Generalreturned to Army service assignedto IX Corps, 1st Division. In mid-September of 1862, Willcox and Withington served together at Antietam.Withington held the right flank with hisnewlyformedregimentwhich included former students from Ypsilanti’s Normal College.

Withington led the 17th Michiganbeyond Antietam tomany well-known engagements, including the taking of Jackson, Mississippi, the Battle of Spotsylvania Courthouse, and the Appomattox Campaign. After the war, he operated a business in Jackson, Michigan, and it was in this town that he was eventually laid to rest.

Brigadier General
As a Brigadier General, Orlando Willcox continued to lead a division under Major General Burnside of IX Corps, eventually finishing the war under General Grant, following Burnside’s removal after the debacle of the Crater. Thewar concluded nine months later. After Appomattox, Willcox stayed in the Army.

The town of Willcox, Arizona was named in his honor during the “Apache Campaign” in 1880. He served a total of 44 years in the U.S. Army until his retirement in 1887. A post-war consideration of their service eventually earned both Orlando Willcox and William Withington the Medal of Honor in 1895. Willcox and his second wife, Julia, areburied at Arlington National Cemetery.

*Explanatory note: about 1,000 men comprised a regiment of infantry, which was divided into 10 companies of 100 men each and designated with letters A, B, C, etc. Each company was led by a captain who took his orders from a colonel. Rarely were regimentsfully manned due to sickness, losses, furloughs, and sometimes desertion.