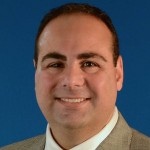 Ara Topouzian grew up in the Birmingham- Bloomfield area of Oakland County. His mother was a stay-at-home-mom who listened to the radio every day. “So I heard jazz, classical– all kinds of music,” he explained. “I love music– especially the microtonal scales used in Armenian and Middle Eastern music.” Following graduation from Wayne State University with a BA in Communications, Topouzian learned to play the kanun, a seventy-six string Middle Eastern laptop harp that that dates back to the 5th Century.

Soon after college, Ara started his own business making and selling cassette recordings of ethnic music. “It turned into a full-fledged world music business,” he recalls. “My office was in Farmington Hills so I joined the Farmington/Farmington Hills Chamber of Commerce. I met folks and networked.” He laughs when he remembers, “I told them that I sold Armenian and Middle Eastern music, something none of them would want.”

Because he enjoyed interacting with the business community, Topouzian joined the Farmington Chamber’s Board of Directors and became good friends with the organization’s executive director.  When a paid position as the Chamber’s Events Director was developed, Ara was offered the job. He worked for the Chamber for ten years. Topouzian left Farmington/Farmington Hills to accept a position as the Economic Development Director in Novi, and worked there for the next six years.

On June 3, 2013 Ara Topouzian was named as the President & CEO of the Troy Chamber of Commerce following the departure of Michele Hodges.  “I’m excited to accept the challenges of this position,” Topouzian said when the appointment was announced. “The Troy Chamber has a proud history of outstanding achievement, and I look forward to working with the (700) members to make their Chamber their most valuable resource.”

Ara also continues to play the kanun as a solo and ensemble musician. He has performed with Armenian and Middle Eastern artists as well as jazz and fusion artists. His music has been featured in several nationally aired PBS documentaries and in 2012 he performed as a guest soloist with the Virginia Commonwealth University Symphony playing an original concerto written for the kanun.

Ara and his wife Della have two young children.

Photo: Ara with his kanun