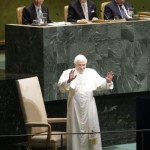 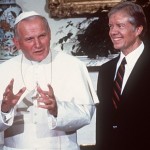 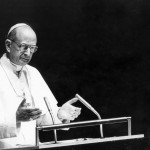 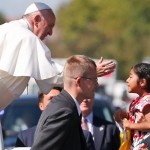 During the final week in September, millions of Americans watched and listened to Pope Francis as he addressed Congress and the United Nations, visited New York and Philadelphia, and met with President Obama. While this was an historic visit and the first time a pope addressed Congress, it was part of a tradition begun fifty years ago.

Pope Paul the VI was the first pontiff to travel outside of Italy since 1809. He visited six of the seven continents of the world and gained the nickname “Pilgrim Pope.” He was also the first pope to visit the United States. During a whirlwind 24-hour visit in October 1965, Paul VI met with President Johnson, addressed the United Nations, and said Mass at Yankee Stadium.

Pope John Paul II visited the United States six times, including a brief refueling stop in Fairbanks, Alaska in 1984. He met with three presidents including Jimmy Carter in 1979; Ronald Reagan in 1984 and 1987; and Bill Clinton in 1993, 1995, and 1999. John Paul II addressed the United Nations in 1979 and 1995. Many local residents had the opportunity to see this pope when he celebrated Mass at the Silverdome in 1987.

Pope Benedict XVI made only one trip to the United States. He was welcomed to the White House on his 81st birthday on April 16, 2008. He also visited Ground Zero in New York City and celebrated Mass at Yankee Stadium.

Benedict XVI at the UN