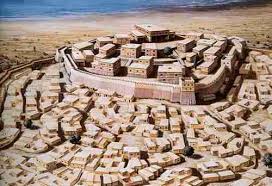 There are 25 cities in the United States named Troy, including two in Michigan– the City of Troy and New Troy, which a tiny unincorporated community of 508 residents in Berrien County, Michigan. Locate Troy, New York on that state’s map, and you will also find cities named Albion, Attica, Auburn, Avon, Farmington, Rochester, and Utica. The Erie Canal, which was completed in 1825, linked the Hudson River at Albany with Buffalo on Lake Erie and the Detroit River. Many pioneers from New York migrated to the Michigan Territory using this water route. When they established a new settlement in Michigan they simply named it after their New York hometown.

But why did colonists in New York name their town Troy in the first place? Historical records document that Troy, New York was formally established by an act of the local legislature on March 18, 1791 from a part of the town of Rensselaerswyck. Perhaps those early citizens knew Troy as the mythical setting in Homer’s Iliad. In his epic poem, Homer describes Troy as a ‘well-founded’, ‘strong-built’, and ‘well-walled’ city. It withstood a 10-year siege, and was only undermined when Greek invaders hid in a large wooden horse.  Perhaps they envisioned building a great and durable city not unlike the one in Homer’s classic tale.

In fact, an ancient city in eastern Turkey was found in 1863 by Frank Calvert, an amateur archeologist. The site, three miles east of the Mediterranean coast, is now recognized as the ancient city of Troy. Subsequent excavations by Heinrich Schliemann between 1870 and 1890 and additional archeological studies throughout the 20th century revealed 9 different cities dating as early as 3000- 2550 BCE. At least 46 levels of inhabitation have been uncovered at the site.  Troy VI (1750-1300 BCE) is most likely the city referenced by Homer. Archeologists found remnants of limestone walls in Troy VI that were 16.4 feet thick and up to 26 feet tall.

Depiction of the ancient city of Troy