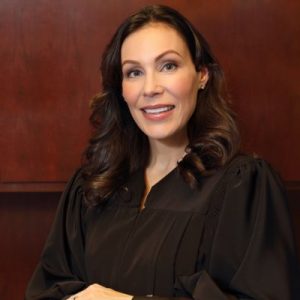 Maureen McGinnis is passionate about practicing law and working for her community. Her role as a recently elected Judge in the 52nd District Court is, in her words, “the perfect marriage” of those interests. “I really do think I am in the place I was meant to be,” she said. “I am advancing my legal career, learning more each day, and interacting more than ever with people in my community.”

Maureen followed in her father’s footsteps, first attending the University of Colorado- Boulder and then returning to Michigan for law school at Michigan State University. She also completed three student internships. Maureen worked on a U.S. Senate campaign in Denver, with the Boulder District Attorney’s Office, and at the United States Department of Justice, Criminal Division, in Washington, D.C.

After passing the Michigan Bar, Maureen McGinnis immersed herself in her profession, working at Donald E. McGinnis, Jr., P.C., her father’s firm. She was quickly recognized for her ability as an attorney and involvement as a young professional. Maureen was the recipient of the Oakland County Bar Association’s Distinguished Service Award in 2010, selected as an Up and Coming Lawyer by Michigan Lawyers Weekly in 2011 and recognized as a “Rising Star” by  Super Lawyers,Michigan for four consecutive years (2011-2014.)

In 2009, Maureen McGinnis was elected to Troy’s City Council. During her term, she and her colleagues made many important decisions that successfully ushered the City through the Great Recession. “I think that the Council benefitted from having new members,” she recalled. “We provided fresh eyes and perspectives to overcome problems.”  Maureen also served as Mayor Pro Tem in 2011-12.

Ms. McGinnis chose to seek a seat on the District Court bench in 2014 rather than run for a second term on City Council in 2013.  In an Oakland Press interview she stated, “I think my experiences in the City Council have helped me really understand what is going on (in the City of Troy) … It has been a really good experience. We’ve faced a lot of challenges in Troy over the past four years, but I think the City is in a really good place to move forward.”

Judge McGinnis and her husband Kevin have a daughter, and are expecting a second child in the spring.