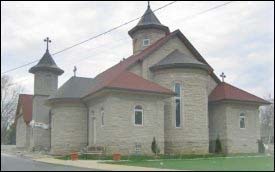 Pastor Simion Timbuc of the Bethesda Pentecostal Church explains that industrious Romanians were were initially attracted to the Metro-Detroit area because of the automotive industry. They found work, settled in Oakland and Macomb Counties, then stayed in the area because of cultural festivals and amenities in cities like Troy. They also built churches near their new homes.

Troy’s leadership and City administration have been supportive and understanding as new congregations built their houses of worship. When construction began on St. Nicholas ROC in 1998, Troy leaders recognized that the church would serve as a focal point for immigrants, support Romanians as they became acclimated and assimilated in the community, and satisfy their cultural and religious needs. The church would also be a landmark in the area. Therefore, the Building Department extended construction deadlines and allowed Father George Carstea to slowly construct the traditional Romanian style church. The stone church was finished last year and consecrated early in 2015.

The existence of these and other religious congregations is only one of the many way ways that diversity has blossomed in Troy.

Montemurri, Patricia and Kristi Tanner. “By 2060, a much more multiracial

Michigan will emerge: What are your chances of meeting someone different from you?” Freep.com. Accessed October 16, 2015. https://www.freep.com/story/news/local/michigan/2014/10/24/michigan-diversity-index-racial-demographics/17671861/.