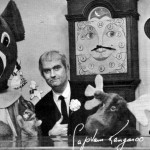 Captain Kangaroo debuted on CBS on October 23, 1955. The show’s producer and creator was Bob Keeshan who spent the next 30 years portraying the gentle Captain and a lifetime advocating for quality programming for children and families.

Robert James Keeshan was born in Lynbrook, Long Island, New York on June 27, 1927. A graduate of Fordham, his first job was as an NBC page and his first on-camera role was as Clarabell the Clown on NBC’s Howdy Doody in 1947.  He went on to emcee “Corny the Clown” and co-created and co-produced Tinker’s Workshop, which were both weekday programs for young children.

But Keeshan is best remembered as the grandfatherly man with big baggy pockets who welcomed children into his Treasure House every morning. “Captain Kangaroo, a round-faced, pleasant, mustachioed man possessed of an unmistakable charm . . . was one of the most enduring characters television ever produced,” wrote the New York Times. The program also featured Mr. Green Jeans, (portrayed by Hugh “Lumpy” Brannum) and puppets including Bunny Rabbit, Mr. Moose, Dancing Bear and Grandfather Clock .

Captain Kangaroo taught important values, provided a positive male role, and emphasized the importance of reading. In a 1996 interview Keeshan stated, “I thought we had a very different and new approach to programming for young people and if we remained faithful to our principles of catering to the intelligence and potentially good taste of the child then we had an opportunity to do some very, very good programming.” Over the years Captain Kangaroo received six Emmys and 3 Peabody Awards.

After 30 years on CBS, the program was televised on PBS until 1993.  Bob Keeshan never really retired, but continued to advocate for positive children’s programs and against violent video games. He wrote Growing Up Happy (1989), Good Morning Captain: 50 Wonderful Years with Bob Keeshan, TV’s Captain Kangaroo*, and the Itty Bitty Kitty books for young children.

*available at the Troy Public Library

Photo: The Captain and friends