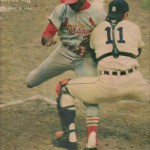 Ward Randol is a Troy resident, an active Villager, and a lifelong Detroit Tigers fan.  His memories of Tiger games in the 1968 World Series are highlighted in a two-part 365 Story.

The early afternoon of Monday, October 7, 1968 was perfect Michigan weather for Game 5 of the Tigers – Cardinals World Series, although the Tigers were one loss away from elimination.  At game time the sun was shining over Tiger Stadium, the air was crisp verging on cold, and the mixed auto and pedestrian traffic at the corner of Michigan Avenue & Trumbull Street was chaotic.  When I finally reached my seat, the game was in the bottom of the first inning and the Cardinals were ahead 3 – 0.  The Tigers # 1 pitcher, Denny McLain had lost a lopsided Game 4 the day before; would our # 2 pitcher, Mickey Lolich, now meet the same fate?  When he came out for the top of the second Lolich seemed unfazed and settled into a string of scoreless innings, while the Tigers’ bats suddenly came alive in the 4th inning against Cardinals’ pitcher Nelson Briles: triples by shortstop Mickey Stanley and left fielder Willie Horton and a single by center fielder Jim Northrup made the score 3 – 2.  Then came the top of the fifth inning when the Cardinals threatened to widen their lead, and the Tigers stopped them and turned the game around with one of the greatest defensive baseball plays I have ever seen.

With one out, Lou Brock, the Cardinals’ epic speedster, doubled.  The next batter hit a line drive single to left field.  Horton picked up the ball cleanly and threw a perfect long strike to catcher Bill Freehan.  Brock accelerated around third base and headed for home while the throw was cutting through the air.  Instead of sliding, he ran into Freehan standing up, while Freehan blocked the plate, held onto the throw, and tagged Brock out!  The crowd went wild!  The momentum had shifted away from the Cardinals.  In the seventh inning, Tigers’ all-time great, right fielder Al Kaline, came to bat with the bases loaded.  After a tense battle with the Cardinals pitcher, Kaline singled home what proved to be the winning runs.  Lolich then finished and won his second complete game of the Series, 5 – 3, sending it back to St. Louis for Game 6 and hopefully (for Tigers fans) Game 7.

Game 6 two days later was a 13 – 1 rout for Detroit.  In the third inning the Tigers set a World Series record that still stands, by scoring ten runs, while McLain recorded a complete game win.  The Series was tied.  The next afternoon most work stopped in my downtown Detroit office while we gathered around the black & white TV to watch Game 7.  The Cardinals’ # 1 pitcher, Bob Gibson was going for his third straight complete game Series victory – but so was Lolich for the Tigers.  Both pitchers dominated for six full innings in a scoreless duel.  The tension was becoming unbearable.  In the top of the seventh, with 2 outs Gibson allowed two singles, by Horton and first baseman Norm Cash, bringing Northrup up to bat.  He hit a rising line drive to deep center field.  The Cardinals’ superb center fielder, Curt Flood, appeared to take a step in toward the infield, then instantly pivoted while slipping slightly and ran full speed back toward the outfield wall.  He never caught up to the batted ball, which bounded away from him giving Northrup a triple and the Tigers their first two runs.  Northrup then scored on a double by Freehan, before Gibson could get the third out.  Each team scored a run in the ninth inning.  It didn’t matter, as Lolich completed his third straight game, winning 4 – 1, and Detroit had its third World Championship.

The 1968 Series was finished on October 10.  Today’s baseball playoffs did not start until October 6, and the 2015 World Series will probably last into November.  All games of the 1968 Series were played in daylight.  None of them will be in 2015.  Half of the starting pitchers for both Detroit and St. Louis pitched complete games in the Series, while relief pitching will be crucial in the 2015 Series games.  The Tigers’ highest-paid player in 1968 was Kaline, with an annual salary of $70,000.  Cy Young Award winner McLain was the highest paid Tiger pitcher at $33,000.  World Series MVP Lolich made $30,000.  Half of the 1968 Tigers’ World Series starting position players grew up in Michigan (Horton, Northrup, Stanley and Freehan).  That too may be an all-time record.