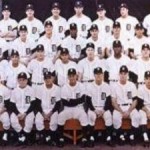 Ward Randol is a Troy resident, an active Villager, and a lifelong Detroit Tigers fan.  His memories of Tiger games in the 1968 World Series are highlighted in a two-part 365 Story.

The Detroit Tigers have won a total of four World Series in their long American League history – two in the Troy Township era (before television), and two after Troy became a city.  This October is the 80th anniversary of the Tigers’ first world championship in 1935 and the 70th anniversary of their 1945 title.  Although I have vivid memories of listening on the radio as a seventh grader to the exciting 7th game of the 1945 Series against the Chicago Cubs, my 365 Stories about the Tigers will recall their 1968 world championship baseball games that were televised into Troy’s homes and workplaces during the first 30 years of Troy’s rapid growth as a city.

The Tigers’ 1967 season was one of their most memorable, for all the wrong reasons.  From July 23 – 28, 1967, Detroit was convulsed by street riots with gunfire and arson that ended only after federal troops were called in.  Ernie Harwell, the Tigers’ great radio announcer, recalled seeing smoke looming over the city from his broadcast booth in Tiger Stadium toward the end of the July 23 doubleheader against the visiting Yankees.  The Tigers’ next scheduled game, at home against the Orioles, was moved to Baltimore.  On the last day of the 1967 season, with three teams including the Tigers virtually tied for the American League lead, Detroit failed to win a doubleheader against the visiting California Angels and thereby ceded the pennant to the Boston Red Sox by one game.

By contrast, and perhaps as a result of 1967’s frustrations, the 1968 Tigers roared to a 9 – 1 record in their first ten games and never looked back.  They won 103 of their 164 games in the regular 1968 season, establishing a club record, and finished 12 games ahead of the second-place Orioles.  1968 was the last year before the American League was split into divisions, so those Tigers had to finish ahead of all nine other A. L. teams to win the pennant.  And they did so with a roster that boasted many players who grew up in Michigan and/or had come up through the Tigers’ minor league farm system.

The first two games of the 1968 World Series were in St. Louis, as its National League champion Cardinals had the home field advantage.  The Tigers negated that advantage by earning a split on the road, with their number one starter and 1968 A. L. Most Valuable Player, Denny McLain, pitching well but losing the first game 4 – 0 and their number two pitcher, Mickey Lolich, winning the second 8 – 1.  Things were looking good for Motown.  Then the Tigers returned home for the next three games.  I was lucky enough to score tickets in the Tigers’ ticket lottery to games 3 and 5.  After St. Louis won games 3 and 4 decisively (7 – 3 and 10 – 1), however, I considered skipping game 5 and going back to work.  But my optimistic nature prevailed, and this Native Detroiter witnessed one of the most exciting games ever for a Tiger fan.  To be continued….