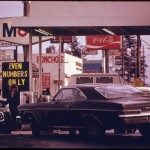 And the price hikes were outrageous! In October 1973, the Organization of the Arab Petroleum Exporting Countries (OPAEC), which had been formed in 1963, implemented what the organization called “oil diplomacy,” and Americans called the oil embargo. OAPEC refused to sell oil to any nation that had supported Israel in the “Yom Kippur War” launched by Syria and Egypt. The energy crisis that followed marked the end of cheap gasoline in the United States and caused the value of the New York Stock Exchange to drop by $97 billion, ushering in one of the worst recessions the U.S. had ever seen.

In 1973, the United States was importing about 19 percent of the crude petroleum the nation used annually. The country’s reserves were low (about 52 billion barrels, a 10-year supply) and domestic production was decreasing as a result of national wage and price controls. All these factors contributed to rising gasoline prices, shortages, and a program of “voluntary allocation” of petroleum products.

OAPEC’s reaction to the 1973 war in the Middle East quickly made things much worse. OAPEC announced that it would punish Israel’s allies by implementing production cuts of 5 percent a month until Israel withdrew from the occupied territories. It also declared that the true “enemies” of the Arab cause, most notably the United States, would be subject to a “total embargo.”

Historically, the oil companies had established per-barrel prices. In December, 1973, however, OAPEC members began to set their own prices on the petroleum they exported. Immediately, the price of a barrel of oil rose to $11.65, 130% higher than the October price, and 387% higher than the price in December 1972. In addition to soaring prices, motorists across the U.S. also suffered through hour-long lines and outright shortages at gas stations.

By the time the embargo ended in March 1974, the average retail price of gas in the United States had climbed from 38 cents per gallon to 84 cents per gallon. Drivers clamored for smaller, more fuel-efficient cars. The larger, less-efficient cars that most American automobile companies were producing declined in attractiveness, and the transition created significant, long-lasting losses for the U.S. auto industry.