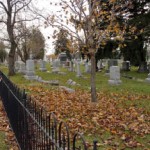 As pioneers established new communities they set aside burial grounds for their deceased. During the early 1800s, four cemeteries were created by Troy Township residents: Beach Road, Crooks Road, Troy Union, and Perrin. Ownership of the four graveyards was transferred to the Township by 1850. Today they are all owned by the City of Troy and each is a locally designated historic resource. (See the 365 Story on October 15.)

Beach Road Cemetery in Section 7 is located on the east side of Beach Road between Long Lake and Square Lake Road. It is quite small and contains the remains of some of Troy’s earliest settlers; the first known burial occurred in 1824. In 1927 the General Richardson Chapter of the Daughters of the American Revolution (DAR) read and recorded all of the information on the stones at Beach Road and in the other 3 cemeteries. In 1986 the markers were read again by the Oakland County Genealogical Society (OCGS.) Sadly the combined ravages of weather and vandalism destroyed all of the original grave markers in the last thirty years.

Crooks Road Cemetery is located along Crooks Road between Big Beaver and Wattles Road and is adjacent to Boulan Park. This cemetery is large and the headstones are still in fair to very good condition. Many include classic symbols and the names of many pioneers are evident. Veterans of both the American Revolution and the Civil War are buried here. Girl Scouts from Troop 304 in Clawson read and recorded the stones in 1974 and highlighted discrepancies they discovered with the DAR reading. The Oakland County Genealogical Society also read the stones in 1986 and in the early 2000s, an Oakland University intern compiled the GPS coordinates of all head and foot stones, and read and photographed each stone.

The Troy Union Cemetery is also fairly large and includes six sections divided by pathways. It is located on the north side of Square Lake Road just east of Rochester Road. During the 1980s well-meaning citizens worked to restore deteriorated and broken grave markers by bonding the pieces together with a special mortar and then sliding the repaired stones into upright metal brackets. Unfortunately the new mortar and the old limestone did not expand and contract at the same rate and additional deterioration has occurred.

Perrin Cemetery was originally the Perrin family’s burial ground. At the time the DAR read the grave markers in 1927 it was known as the Anderson Ridge Cemetery. Later it was referred to the Coolidge Cemetery. It is located on the east side of Coolidge between 14 and 15 Mile Roads. By 1986 the OCGS could not decipher the worn letters on the head stones. Thus the 1927 DAR reading is remains a significant historic record.

Copies of the readings conducted by the OCGS in 1986 with additional material from the 1927 DAR reading are available at the Troy Historic Village and computerized records are available through the City Clerk.