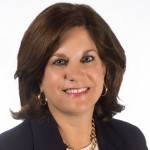 Gayla Houser grew up in Shelby Township, but she learned the names of Troy companies and business people from her dad, a UPS driver whose delivery route included Troy. While still a student Gayla also worked part time in Troy.

After earning a degree in journalism at Wayne State University, Ms. Houser worked for the Central Business District Association of Detroit (1981-1987). She promoted the downtown business district, retail merchants, and restaurants through programs that encouraged people to work, play, and invest in downtown Detroit. “I helped promote Downtown Detroit Days, the Ethnic Festivals, and a “Keep it Safe” campaign that raised funds to install lighting in Hart Plaza, around the publicly owned statues, and on the Ambassador Bridge.”

Lee Ricelli and Gayla Houser married in 1983 but 1987 was a banner year for the couple. They moved to Troy in February, Gayla was hired as the Executive Director of the Troy Chamber of Commerce in March, and son Ross was born in August. Gayla remained at the Chamber until 2001.

Gayla recalls that while she worked for the Chamber, many large corporations including Delphi, Kmart, and EDS helped highlight Troy as a dynamic center for global corporations, financial firms, and retailers. With over 850 members, the Troy Chamber became one of the largest and most robust business organizations in the State.

“The expansions of Big Beaver Road and the Somerset Collection were also very exciting,” she said. “We initiated a lot of activities to support businesses along the corridor during the construction.  We served Rocky Road ice cream and Rock ’n Rye soda pop and Mayor Stine volunteered to wash motorists’ windshields.” She added that the Chamber’s annual black-tie fundraiser was dubbed the Bigger Beaver Bash and featured special guest Jerry Mathers from the old “Leave It to Beaver” television series.

Important committees were also formed by the Chamber in the 1990s. Troy businesses and area schools partnered to create A.P.T. to Succeed. Chamber members worked with school counselors to help middle and high school students as they considered career and education paths. As part of the program 8th graders presented their student portfolios during personal interviews with Chamber members.

Awesome Family Works of Troy was developed as an engaging human resources council. The group provided employers and employees with resources and information on child and elder care and other family assistance needs. The group was very effective as more families adjusted to both parents working outside the home.

Gayla Houser left the Troy Chamber in 2001 and, after working for a start-up company for a year, was hired by Miller Canfield to support business development. She recently retired after 13 ½ years of service. We congratulate her on a full and exciting career in Troy.