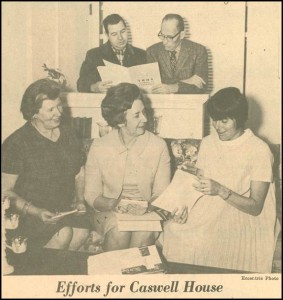 The Troy Historical Society was organized in 1966 as a nonprofit organization focused on preserving their community’s past. The Charter members of the Society, including civic leaders Morris Wattles, Lois Lance, and Norman Barnard, saw that with each commercial and residential development in the new city the farmsteads, homes, and businesses from the pioneer and township eras disappeared. Beginning with the 1832 Caswell House, the Historical Society spearheaded efforts  to acquire threatened historic buildings by gift agreement or purchase and raised the money to relocate the buildings to the vacant land behind the 1927 Township Hall on Wattles Road at Livernois. Then the Society contributed funds and volunteer labor in partnership with the City of Troy to restore the buildings. Over the course of 40 years the Troy historic Village was developed.

As the Village grew, the Historical Society invested time and resources to develop special events and programs in the Village, contributing 4,000- 6,000 hours of volunteer service annually.  The total capital and volunteer investment in the Village in the last 49 years is over $3,500,000. The Hand & Eye Show, a popular holiday craft show, was the primary fundraising event of the Society for over 20 years.

In 2016 the Troy Historical Society will celebrate the organization’s 50th anniversary.