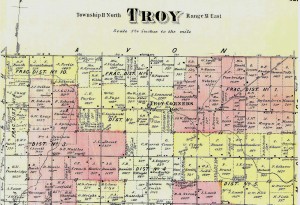 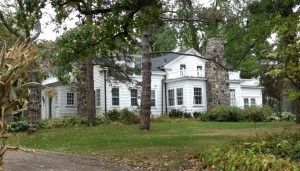 Earlier 365 Stories that explained how Troy Roads were named have received many positive comments. So we are pleased to include this installment by John Marshall, an avid historian and member of the Bloomfield Hills Historical Society.

In the section of “Pathways of History Through Troy” by Lois Lance, the following is written about Beach Road: . . . named for the Beach family, descendants of Michael Beach . . . who took up land in Section 18 in 1824.  In 1827 Michael also acquired 160 acres in the S ½ of Section 31 in Avon Township. In all, four (4) generations of the Beach Family have lived along what became the 3-mile long Beach Road.

Pioneer Michael Beach had a son, Ruben Castle (R.C.) Beach (1794 – 1869), who was 25 years old when his father Michael made his first land acquisitions.  By 1857 R.C. Beach had become the owner of record on the 160 acres on the southern boundary of Avon Twp. and another 80 acres in Section 18 of Troy Township.  (See the map segment from 1857 and note that Beach Road did not yet exist.)  R.C. Beach had six children. The two oldest sons were David Potter (D.P.) Beach (1833-1917) and Danford Beach (1836-1909).  Danford inherited the 80 acres in Section 18 along the east side of the north-south half section line and his older brother, D. P., procured 110 acres two miles north in Section 6 on the west side of the north-south half section line and the northern boundary of Troy Township.

The 1872 property ownership map (colored Township map) shows a north- south road three miles long from South Blvd. on the north to Wattles Rd. on the south.  Today this road is named Beach Road, certainly after the Beach Family that lived along it for so many years.  The Beach Road (Family) Cemetery is also on this road just north of Long Lake Rd. (See also 365 Story October 14.)

Danford Beach was a bachelor and lived with his mother and sister.  He died in 1909 without any offspring. However, D. Porter Beach married and had sons, Marvin C. and EdwinP.  Marvin C. Beach (1879-1957), inherited the 110 acres in the south west corner of South Blvd. and Beach Road.  Marvin, like his uncle, Danford, was a lifelong bachelor and lived with his mother in the farmhouse.  A couple of years after Marvin died in 1957, his brother, Edwin P. Beach, inherited the land and became instrumental in creating the several Lake Charnwood subdivisions.