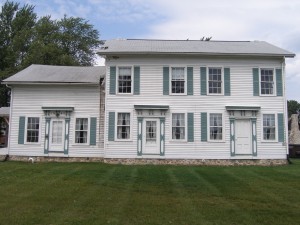 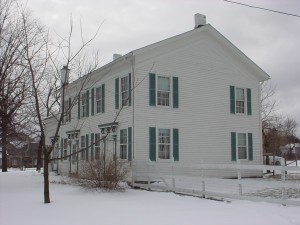 The Niles-Barnard House is bookends for Troy History. The original 1 ½ story home was built by pioneer Johnson Niles’ family in 1837 on land that is now the southwest corner of Livernois at Square Lake Road. Niles is credited with naming the community Troy. (See 365 Story July 26.)  Within 25 years, according to historic preservation architect Gene Hopkins, the Niles family completed a large 2 story addition that was likely used as a public house or inn.

There is a reference regarding the public house in the 1877 History of Oakland County, plus structural and archaeological evidence to support this use of the house. The addition has two front doors, and the interior featured a huge fireplace on the main floor for preparing big meals and a second hearth on the second level. In the past, men would have used one entry into a dining area where food and alcohol were served. Women would have used a second entry where there no alcohol was served. Sleeping areas were on the second floor. An archaeological survey completed when the house was relocated in 2010, revealed a kitchen dump with over a thousand shards of different types of pottery and glassware plus bones from butchered animals– more refuse than any single family would create over time.

In 1939 Norman Barnard, a young attorney, learned that the old Niles house was being sold for back taxes. He purchased it for $1,000, using funds that he borrowed from his parents, grandmother, and future mother-in-law. He then remodeled the worn interior before marrying his sweetheart, Harriet Kyser, in the living room. He and Harriet raised their six children in the home.

In 1955, while Norman was Troy’s Township Supervisor, the citizens committee for home rule incorporation met in Norman and Harriet’s home. (See 365 Story March 5.) The plans to establish the City of Troy were crafted in the home and the new City was literally platted on the dining room table.

It is appropriate then, that this wonderful old house where Township and City pioneers lived and met should be preserved. In January 2004 Harriet Barnard donated the house to the City of Troy on the condition that it be relocated to the Troy Historic Village.

The Troy Historical Society purchased property immediately west of the Village for the house; retained Hopkins Burns Design Studio to complete a new site plan that included space for the house, additional parking, and a new visitors center; and raised the funds to relocate the structure. The Niles-Barnard House was moved on to its new Village foundation in October 2010. The house was made weather tight, but awaits interior restoration.

Harriet and Norman’s eldest son, Fred Barnard, has written a delightful book about the house and his memories of growing up in the historic home. Copies of The House with Two Tales are available at the Village Store just in time for holiday gift giving.

The House with Two Tales, by Fred Barnard, 2015