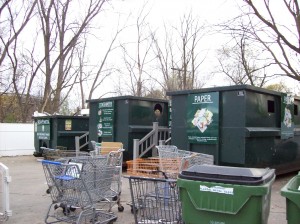 Organizations in Troy like South Oakland County Resource Recovery Authority (SOCRRA) encourage residents to recycle and compost. SOCRRA, which exists in 12 municipalities including Troy, has given back to the City in order to inspire its citizens to keep recycling and composting in a variety of ways. For instance, longtime SOCRRA volunteer Pam Brady affirms that SOCRRA communities are allowed to recycle anything from plastic containers to Styrofoam with no appointment needed. She even mentioned that SOCRRA is in the process of combining recyclable materials into a single stream to make recycling easier for everybody. SOCRRA Recycling Educator Karen Beaver added that even though only two communities are currently using single stream, recycling in those areas has increased by twenty percent. This clearly shows that recycling can be a win-win situation.

In another example, every time SOCRRA communities separate “household garbage from yard refuse”, the compost is turned into humus – a “soil enhancer or mulch” – that SOCRRA communities can use in their parks and home gardens. The best part is that it is free! Since its inception in 1989, this composting program has allowed SOCRRA communities to use compost to improve landscape beds, flower gardens and grass without any chemicals, pesticides, or extra cost. In various ways, SOCRRA has motivated its members to recycle and compost more by offering numerous incentives beneficial to all.

SOCCRA Facility in Troy on Coolidge

Zarobe, Christina. 1989. Into topsoil it shall return: Troy a leader in composting. Troy Daily Tribune,  October 25.