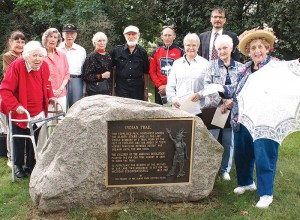 One cannot write about Troy’s history in the 20th century and not mention Lois Lance and Dorothy Scott. These determined and dedicated ladies devoted tremendous amounts of time and energy to document and preserve the history of the community.

Lois Jamieson Lance was the wife of Donald Lance, an active member of the committee to incorporate the City of Troy. Donald was also elected to the first City Commission (now City Council) in 1955. The Lance family resided in Troy from 1946- 1976. When the Troy Historical Society was organized in 1966 Lois became an active member. She researched the community’s history and wrote a small book, Pathways of History Through Troy, which was published in 1976 as a bicentennial project. When the Lance family moved to Royal Oak, she became an active historian in that community. Lois worked extensively with friend and collaborator David Penney. Together they founded the Friends of the Almon Starr Historic House to help preserve the building and adjacent Indian trail; researched Royal Oak history; and co-authored Twigs and Acorns and Cemeteries Walking Tour.

“We were kindred spirits in terms of local history,” recalled Penney. “We thought in similar ways about preserving our heritage and she always had an independent view.”1

Dorothy Scott, another long-time Troy resident, saw the value of old township homes as important pieces of local history. During the City’s period of rapid development in the 1970s, she worked tirelessly through the City’s Historic District Commission to convince Troy residents to accept local historic designation for their vintage homes. She also worked to preserve deteriorated grave markers in Troy’s historic cemeteries. On more than a few occasions Mrs. Scott found herself at odds with members of City Council and City administrators who were focused on development rather than preservation. However, Dorothy Scott remained committed to preserving simple buildings from Troy’s agricultural era.

In addition to her efforts as a member of the Troy Historical Society and the City’s Historic District Commission, Dorothy was a member of the Lost Lake Woods Club in Northern Michigan. She and her husband Kenneth had three daughters. She passed away on March 26, 2009 at the age of 86.

Friends of Almon Starr Historic House stand around a memorial rock with a plaque denoting the Saginaw Indian Trail Sept. 21, 2013. Lois Lance (with walker) is on the far left.