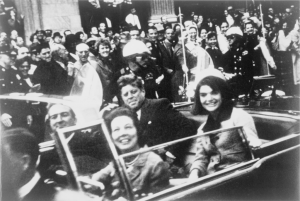 November 22 conjures sober memories for many Americans of the assassination ofPresident John F. Kennedy. The 35th president of the United States was mortally wounded on November 22, 1963 while traveling through Dallas, Texas in an open-top convertible. With him were first lady Jacqueline Kennedy, Governor John Connally, who was also wounded, and the governor’s wife.

The President and Mrs. Kennedy were in the midst of a 2-day visit to Texas. The goal of the trip was to unify feuding Texas Democrats and rally their support for the President before he announced his intention to seek a second term. Following stops in San Antonio, Houston, and Fort Worth, the President arrived at Carswell AFB in Dallas. From the base, his motorcade traveled ten miles through downtown Dallas en route to the Trade Mart where President Kennedy was scheduled to speak at a luncheon. As the procession passed the Texas School Book Depository at 12:30 pm, gunfire erupted. Bullets struck the President in the neck and head. Governor Connally was struck in the chest. The limousine sped to Parkland Memorial Hospital where Kennedy was pronounced dead at 1:00 pm.

Within two hours, the President’s body was placed aboard Air Force One and before take-off US District Court Judge Sarah Hughes administered the oath of office to Vice President Lyndon B. Johnson. Mrs. Kennedy, still wearing a blood spattered coat, stood beside them in the crowded plane.

President Johnson’s first proclamation was to declare November 25 to be a day of national mourning. On that Monday, scores of people, many in tears, lined the streets of Washington DC to see a horse-drawn caisson carry President Kennedy’s flag-draped coffin from the Capitol Rotunda to St. Matthew’s Catholic Cathedral. Millions of Americans watched the solemn procession on television. Following the requiem Mass in the cathedral, the procession continued on to Arlington National Cemetery, where the leaders of 99 nations gathered as John F. Kennedy was buried with full military honors. During the ceremony Mrs. Kennedy lit an eternal flame at her husband’s grave, which still burns today.

President and Mrs. Kennedy moments before the assassination