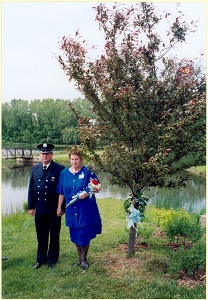 This story is excerpted from Fire Calls and Station Stories, by Loraine Campbell and Fred Barnard, 2009

The Troy Fire Women’s Auxiliary was established in 1977. They provided water, coffee, and donuts to the firefighters at the scene of a fire, if the men requested it. They also supplied emergency food, shelter, and clothing to fire victims and raised funds for burn clinics and camps and education programs for fire safety. “Rita Hennessey, whose husband was at Station 5, organized the group,” explained Gerry Young, a charter member. “Women knew the wives of firefighters at the stations where their husbands served. However through the Auxiliary they met wives from other stations.”

The women held bake sales, auctions, and social gatherings to raise money. Their major fundraiser each year was a fashion show. “The event, held at the San Marino Club, generated about $4,000 annually,” Gerry explained. “Every year we donated the funds we raised to the burn clinics, Children’s Hospital, and to education programs. We kept some money to assist families and to make up Care Kits for fire victims.”

Gerry Young also suggested to the City that a park be named for the firefighters and that trees might be planted in the park as memorials for deceased firefighters. When she submitted the idea on behalf of the Auxiliary, City Manager Gerstenecker responded, “Why didn’t we think of that?”

The City established Firefighter’s Park and continues to support Memorials at the park by buying the trees planted there. The first ceremony was held in 1991 when a tree was planted in memory of Romeo Marceau, a charter member of Station 2.

Jeff Denny and Gerry Young with the tree dedicated to the memory of her husband, Lee Young, at Firefighter’s Park