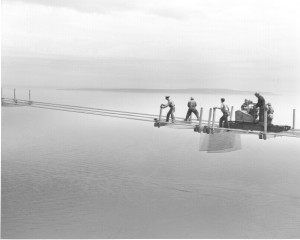 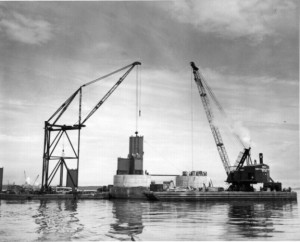 Enjoy Part 2 of this 365 Story on Michigan’s very own “Big Mac”! See yesterday’s post for Part 1.

After the state legislature abolished the Mackinac Straits Bridge Authority, bridge backers rebounded, forming a citizens’ committee to obtain legislation recreating a bridge authority. By 1950 the legislation was enacted, but it limited the Authority’s purview to determining the feasibility of constructing a bridge. The law required the Authority to consult with three of the world’s foremost long-span bridge engineers and traffic consultants for advice on physical and financial feasibility. In January 1951, the Authority submitted a very favorable preliminary report, stating that a bridge could be built and financed with revenue bonds for $86,000,000. Again world events – this time, the conflict in Korea – intervened, causing material shortages and delays. When legislative authority was granted, early in 1952, the Authority immediately asked the Reconstruction Finance Corporation (RFC) to purchase $85,000,000 worth of bonds.

While the RFC was studying the request, a private investment banker became interested in the project, and offered to manage a group of investment companies that would underwrite the sale of the bonds. The Authority accepted the offer and was ready to offer its bonds for sale in March 1953 but, due to weakness in the money market, there were not enough takers to guarantee successful underwriting.

In order to make the bonds more attractive, in spring 1953, the Legislature passed an act committing gasoline and license plate taxes to support bridge operations and maintenance. Toward the end of the year, the bond market recovered and $99,800,000 worth of Mackinac Bridge bonds were bought by investors across the country.

Bridge construction officially began on May 7 & 8, 1954, at St. Ignace and Mackinaw City. The bridge opened to traffic three and a half years later, on November 1, 1957. The bridge opened on schedule, despite the difficulties and hazards of marine construction and the deaths of five bridge workers. The bridge’s 100,000,000th crossing took place on June 25, 1998 and its 150,000,000th on September 6, 2009. When was the last time you crossed the Mighty Mac?