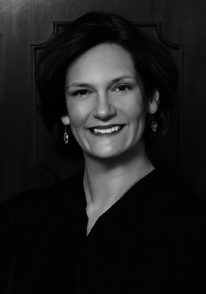 Judge Hartig has deep family roots in the local community. She spent her early childhood on Key West Drive in Clawson where people really knew their neighbors.  “And this true story proves it,” she explained, “My family moved away when I was in the fourth grade. I returned to my former neighborhood and stayed with a family friend on my former street after completing law school fifteen years later. When the mailman saw me he said, ‘You’re not Ken and Marty’s daughter are you?’ He remembered my parents!”

During the intervening years Judge Hartig graduated from James Madison College at Michigan State University and obtained her law degree from the Washington College of Law at the American University, graduating in the top 5% of her class.  She was also selected to serve as a White House intern during Ronald Reagan’s presidency. “I was assigned to Vice President George W. Bush’s press office. Every morning I scanned five daily papers looking for his name and prepared a press pack. I can still spot the word “bush” on any printed page!”

Even though the job market was very tight when Judge Hartig passed the Bar in 1991, she was hired as an Assistant Prosecuting Attorney for Oakland County where she worked six years prosecuting misdemeanors and felonies. She was also a co-founder of the Domestic Violence Assault Unit, which prosecuted serious domestic physical and sexual abuse cases. She then entered private practice where she specialized in criminal and traffic law for 14 years.She was honored as a Michigan Super Lawyer in 2009 and 2010, earning the designation as one of Michigan’s top (5%) criminal law attorneys.

After spending 20 years in the courtroom, Judge Hartig decided that she would seek a seat on the bench. “I felt that I had earned a seat at the table. I could do the job.” In 2010 she was elected to a six year term as one of 2 judges in the 52nd District Court in Oakland County. In her current position, Judge Hartig presides over Sobriety/Drug Court, which provides intensive one-on-one support for offenders who are heavily addicted to drugs or alcohol. She has also spearheaded a campaign to build awareness among parents and youth, including student athletes, of the dangers of using opiate-based prescription painkillers.

Judge Hartig also volunteers at Troy Schools and is active member and past president of the Kiwanis Club of Troy,Locks of Love, the North Woodward Community Foundation, and the Troy Coalition Against Drug and Alcohol Abuse. Judge Hartig, her husband Kevin, and their two children are delighted to live in Troy. “Troy,” the Judge states, “has provided my family with the greatest life I could have hoped for!”