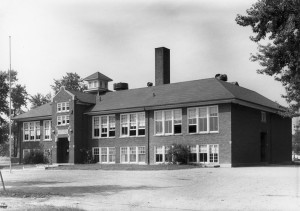 In 1827 the Michigan Territorial governing group passed a law allowing for the creation of public schooling. The Northwest Ordinance had set aside section 16 of each township for the support of public schools, so when the land in that section was sold the money went into a school fund. By 1872 there were nine school districts within Troy Township, and nine more districts that included land in Troy Township and adjoining townships. One of the Troy districts, number 7, had a schoolhouse on Maple Road at Coolidge, but that district had ceased to exist and is not shown on the map of 1906. Adjacent districts show expanded boundaries on the 1906 map.

The Troy districts each had a one room schoolhouse, and it was not until World War I ended that multi-room school buildings were constructed. During the Great Depression a law was passed that required students to be educated to the age of sixteen, so the schools that had only operated through grade eight had to either offer high school education or pay tuition to a neighboring district for their students who had passed eighth grade. Only two of the Troy Township districts, Big Beaver and Log Cabin, offered high school programs.

In 1948 (I think) there was a proposal to consolidate the Troy Township school districts into a single district. The eight districts that only included Troy land agreed to the consolidation, but none of the “fractional” districts opted to join. County Line School at Maple and Dequindre joined the Warren School district, while Stiles and Stone schools became part of the also newly consolidated Avondale Schools. The Leonard School district had a school house, (the only district still with only a one room school) at the corner of Long Lake and Coolidge, but it had been empty for a few years as there were so few children living in the district it was cheaper to pay tuition in neighboring districts than to hire a teacher. Still, Leonard School was a political entity and was included in the Troy Township School district that was formed and began joint operation in 1950.

The Troy districts that consolidated were Troy Union, at Square Lake and Atkins Roads; Troy 2 at Square Lake and Livernois; Leonard; Smith on a side street near Livernois and Wattles; Colerain at Long Lake and John R; Big Beaver near Big Beaver and Rochester; Log Cabin at Livernois and Maple; and Poppleton at Big Beaver and Crooks. Neighboring districts included Stiles at South Boulevard and Livernois; Stone School at South Boulevard and Adams; Adams School at Maple and Adams (consolidated into the Birmingham system prior to World War II), Oak Ridge School at 13 Mile Road and Rochester, Lamphere School at 13 Mile and John R; and Starr School at 13 Mile and Crooks. Clawson School opened around 1920 and took a few Troy Township students. In later years Log Cabin School was annexed to the Clawson district.

I have seen a few pictures of the old one room schoolhouses, and of course you see the Poppleton School every work day. A few of the 1940s buildings continued to be used, and perhaps the Troy Union School and Troy 2 (later called Johnson Niles) are still in use. Leonard School burned in the 1960s. Big Beaver and Log Cabin were torn down for commercial development of the sites. The Smith School was used as the bus garage and office for years, but I assume has been torn down now.