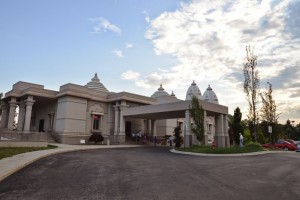 Now a holy sanctuary for many Hindus, the visualization of the Bharatiya Temple in Troy came to fruition during the early 1970s. The mission was to create an environment that would “fulfill the spiritual and cultural needs of the Indian community.” On January 25th 1975, the dream became a reality as a planning meeting held at the Northwood Inn in Royal Oak ended with the formation of a 7 person ad-hoc committee. This group was charged with organizing a fundraiser to benefit the temple-to-be and drafting a constitution, ensuring that the organization would represent all of the good qualities of great Indian heritage and promote all aspects of Indian way of life, philosophy and religion.

Held on March 21, 1975 at the Kingsley Inn, the fundraiser brought in $140,000. The constitution was adopted, and the site on which the future temple would be built was chosen: an 18 acre lot in the northwest corner of Troy. On July 4, 1976 the Bhoomi Pooja, a ceremony to ask the goddess Mother Earth permission and good will before construction, was performed and more generous donations soon came flooding in.

The construction of the temple began on October 2, 1980, the birthday of Mahatma Ghandi; it opened to the public on July 19, 1981. Originally planned to hold 350-400 people, the temple has grown considerably since its inception in terms of building expansion, activities, and membership. Today the temple includes a Main Pooja Hall, a multi-purpose hall, kitchen and dining facility, and a small apartment complex for the priests and guests. A number of religious and Pooja services occur during the week. Sunday services include regular prayers, Bhajans and discussions about Hindu philosophies and ways of life.

Troy Historical Society members and friends visited this amazing structure as part of THS’ Place of Worship tour series in March of 2015. Join us in 2016 when Place of Worship tours resume—we will explore many different places of worship in and around Troy, learning the history of these congregations and seeing the beautiful and unique architecture of their buildings. Visit www.troyhistoricvillage.org/events this spring to learn more.