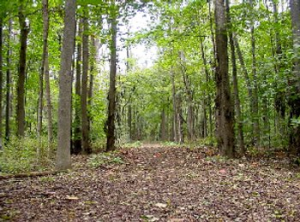 As part of Michigan Week activities, in May 1983, the City of Troy fulfilled a promise made in 1963: to name the 11-acre, wooded section of the Civic Center that contains the city’s fitness trails after Philipp J. Huber, a businessman whose widow had donated the land for the park. Huber, who helped found Ex-Cell-O Corporation in 1919, bought the 135 acres of farmland that became the Civic Center in the 1930s. It was “a retreat to get away from business,” according to his son Robert, who was mayor of Troy when the City purchased the land.

The Huber family raised cows, poultry, and hogs and grew sugar beets, corn, wheat, and oats when they owned the site. Robert Huber recalled seeing foxes and pheasants in their lane– animals that would also enjoy the undeveloped nature of Huber Park. He said of his father, “His whole life, he was interested in trees and animals, and he would be very proud of this, if he was here.” The family sold the land to the City of Troy because the I-75 right-of-way absorbed their house and divided the property. The park remains largely natural and undeveloped, though the adjacent tennis courts were annexed to it, doubling the acreage of the park.