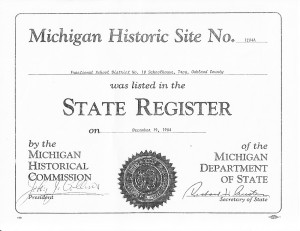 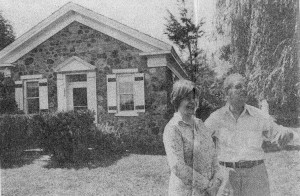 It’s no surprise to us that so many people ask about the one-room, stone building located at the southeast corner of South Boulevard and Adams Road. In a modern city of glass-and-steel commercial buildings, it is an oddity. In a centuries-old community, it is an historic gem, and the stories of the people who owned the land, taught in the school, and called the building home are also to be treasured. The Troy Historic Village 365 Project will focus on the Old Stone School each Monday in May.

The front-gabled, Greek Revival Old Stone School and its accompanying well were built in 1857. A four-seat stone outhouse with twin doors – one for girls, one for boys – was built at the same time. The 20-inch-thick walls were constructed of mortared local fieldstone, using course rubble construction. This technique uses roughly dressedstones of mixed sizes and shapes plus small stones to fill irregular voids. The building served as a schoolhouse between 1858 and 1933.

Old Stone School has three windows, evenly spaced along each side, and one on each side of the front entry door. While covered with plywood at this time, they are all the original nine-over-nine paned windows and include many original glass panes and wood lintels and sills. The front door is also the original paneled oak, with a pediment gable, pilasters, recessed transom lights, and dentil molding.

The last people to walk through the doors of the old stone school every day were Greta and Charles DiGioia, (See 365 Stories on March 13 and April 4) who purchased the property in November, 1976. Charles, an engineer and sculptor, and Greta, an interior designer and painter, quickly set about extensive cleanup, as the roof was leaking, parts of the ceiling had collapsed, the ¾ acre lot had grown wild, and four layers of wallpaper needed to be removed.

In a 1977 Oakland Press article, Greta stated that they hoped to eventually hold an annual May Day party on the property, adding, “I have found that, if you entertain children in a spiritual, natural way, it’s something they will always remember.”1

The DiGioia’s were successful in their petition to have the schoolhouse placed on the Michigan State Register of Historic Places. A certificate was issued, dated 19 December, 1984, the year after Charles died, at age 70. Greta remained in the home until her death in 2008, at age 81.

Greta’s heir, her younger brother Finn Bergishagen, later donated the property to the City of Troy. The additions built while the property was used as a residence have been removed, and the property cleared of overgrowth. It now contains only the original three structures: the school, the outhouse, and the well.