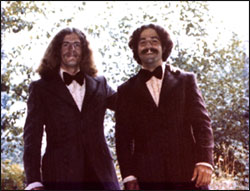 Foot-kicking a small sack has ancient origins in Native American cultures and in many nations including China and Thailand. Mike Marshall, an Oregon native, learned to play “football” from a Native American while in the military. He later introduced acquaintance John Stalberger to the game. Stalberger quickly discovered that “hacking the sack” was a lot of fun, great exercise, and a good way to rehab his injured knee. In 1972 the two young men decided to market their sacks and a reinvented game under the trademark “Hacky Sack®.”

Marshall and Stalberger experimented with oval, square, and round sacks made of fabric, leather, and denim. They also tried different fillings, including buttons, rice, beans, seeds, and small plastic pellets. The pair determined that a round, 2-panel leather sack filled with inert plastic beads was the most durable model and had consistent motion while in play. Their Hacky Sack® games also stressed that players should use both the right and left sides of their bodies and only touch the sack with their feet and knees.

When Mike Marshall suffered a fatal heart attack in 1975 at the age of 28 John Stalberger continued to pursue their dream. Between 1974 and 1977 he sold a few thousand Hacky Sacks® in Oregon. By 1978 the Hacky Sack® craze had caught on and competitive “footbag net” tournaments were scheduled.

Marshall was issued a patent in 1979 for Hacky Sack® brand footbags. In 1983 Wham-O Inc. purchased the North American manufacturing and distribution rights and promoted the beanbags alongside their Frisbee discs. Today Hacky Sack® is played in driveways, on street corners, at family picnics and in tournaments around the world.