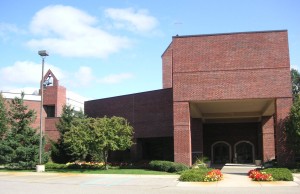 St. Thomas More Catholic Church was established by the Archdiocese of Detroit in early June of 1963. The first Mass of the new Catholic Community was held in Eastover Elementary School on June 23, 1963.  One week later the ground breaking for the new Parish worship area was held. At that time there were 350 families in the Parish.

The founding Pastor was Reverend William Anderson who served from 1963 to 1984, followed by Father Edward Belczak.

During these past fifty years the membership of St. Thomas More has grown, not only in physical size, but in its willingness to serve the good people of the Troy and Bloomfield Hills community. We applaud the City of Troy for its 60 years of growth and progress and the good people of St. Thomas More Catholic Church look forward to a bright future filled with both promise, and continued growth.