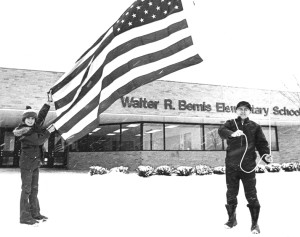 Walter Bemis was neither wealthy nor famous. But he was beloved by the community and rich beyond measure. The namesake of Bemis Elementary School moved to Troy in 1927 from Temperance Michigan. His family’s saving were wiped out after both his wife and son contracted typhoid. “Someone I knew was coming here. So I asked him if he found me a job that paid more money to let me know. So I came here.”

Bemis was working in a corn in field that is now part of White Chapel Cemetery when he broke both of his arms in an accident. While waiting to regain his full strength for farming, Bemis agreed to help out at Poppleton School, (which at that time was located on the corner of Crooks and Big Beaver Roads.)

Mr. Bemis loved the work and stayed. He also loved the children and cared for them. In the days before school cafeterias he was known to warm kettles of soup so the children could have a hot lunch. If a child did not have a lunch, he always seemed to have an extra sandwich.

It was 2 ½ years before Bemis took his first day off from his temporary job. He continued his work as the Poppleton custodian for the next 30 years until he was 70 years old. Then he worked for a decade on a part time basis. Even in retirement he would substitute for an ailing custodian when needed. He also spent his leisure time building sandboxes and bookshelves for “his children” in the Troy Schools.

Walter Bemis and his wife Rowena were married 71 years. They had four children and numerous grandchildren, great-grandchildren, and even a great-great grandchild before he passed away in 1991 at the age of 93.

Ken Lahti, the Principal at Bemis in the early 1980s stated, “He was kind and hardworking, always giving his best. If we could follow this pattern, we would all be better.”