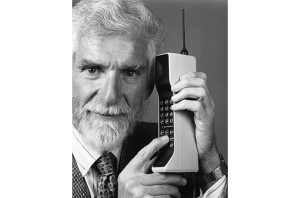 Until 1973 people carried change in their pockets and made phone calls from pay phones when they were away from their home or office. But in 1973, Dr. Martin Cooper, an engineer at Motorola changed personal communication forever when he placed a call on a portable mobile phone while standing on a sidewalk in New York City.

An electrical engineer at Motorola from 1954 to 1983, Cooper and his team devoted their careers to developing mobile phones that freed people to communicate wherever they were. He is known as the “father of the cell phone.”

That first call was made from a DynaTAC, which stood for DYNamic Adaptive Total Area Coverage. The device weighed 2.5 pounds, was 10 inches long, and because of its mass was dubbed “the brick” or “the shoe” phone. The battery comprised most of the phone’s weight but after only 20 minutes of talk time it had to be recharged for 10 hours. By 1983 the handset was reduced to half its original weight and became available to consumers at a list price of $3995. It took another 20 years for cell phone use to surpass the use of landlines.

Cooper left Motorola before the DynaTAC was sold commercially and over the years he founded a number of companies that advanced cellular phone devices and service, including Jitterbug, a cell phone with simple features meant for the elderly. Dr. Cooper received the Charles Stark Draper Prize from the National Academy of Engineering in 2013.