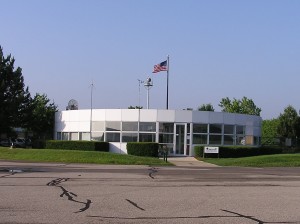 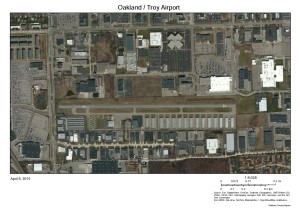 Do you ever wonder where the airplanes you see coming in low over Crooks Road or Coolidge Highway are planning to land? Those planes may be carrying business travelers, tourists or freight to the Oakland/Troy Airport, located at 2672 Industrial Row, Troy, south of Maple Road and north of Cummingston Park.

In 1946, Berz Airport (the original air travel facility on this site and the subject of a story posted here on April 19), had an unpaved runway and could accommodate 14 planes in its cement-block hangar. Today, Oakland/Troy Airport has a 3,550 foot, asphalt runway, T-hangars for 138 planes, and open, asphalt tie-downs for 40 more.

Oakland County purchased the airport from its last private owner, Rockwell International, in 1979, and, over the years, eliminated the cross-wind runway, lengthened and repaved the east-west runway, and constructed a parallel taxiway. The County built a new terminal on the south side of the property, constructed dozens of T-hangars and completely security-fenced the 119-acre premises. Recently, the runway has been resurfaced and the terminal given an extensive interior renovation.

Oakland/Troy is considered an “executive” or general aviation airport; it handles helicopters and private, corporate and charter aircraft, but not commercial airlines. Pretty large planes can land there, though, as long as they do not weigh more than 15,500 lb. Local TV news/weather/traffic helicopters are based at the site, along with the Beaumont Health medical airlift helicopter. Flight training is available at the airport, for both helicopters and fixed-wing aircraft. The airport is a hub for recreational flyers, as well, with several flying clubs making Oakland/Troy Airport their home. Flying clubs make it possible for their members to enjoy the opportunity to fly without the individual expense of purchasing and maintaining a plane.