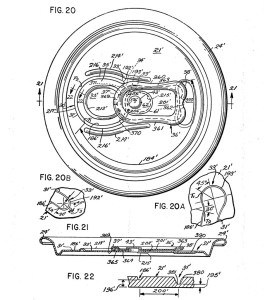 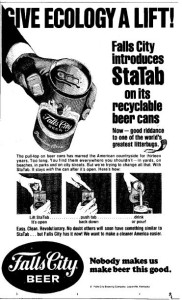 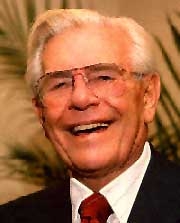 Beer and soda pop were originally sold in glass bottles. The first flat-topped beer can was marketed on January 24, 1935. Clicquot Club Ginger Ale was probably the first soda sold in a “cone-topped” can produced for retail distribution in late 1938. Flat-topped soda cans became popular in the 1950s. The challenge for beverage manufacturers was to produce a coated metal can that did not react with the beverage and change its flavor. The next challenge was to develop a way to open the can without an old-fashioned bottle opener, often referred to as a church key.

In 1959 Ermal “Ernie” Fraze, owner of the Dayton Reliable Tool Company, invented the pull tab opener for cans. While he did not receive a patent for his invention until 1967, Fraze convinced the Pittsburg Brewing Company to use his design. They introduced cans of Iron City Beer with pull tab openers in 1962. Within a few years pull tabs were used by US breweries across the country.

Pull tabs posed two problems. Millions of them were tossed on the ground and became a significant source of litter. People who didn’t want to litter dropped the pull tab in the can where it presented a choking hazard. Both problems were solved in 1975 with the introduction of the Sta Tab developed by Daniel F. Cudzik at Reynolds Metals Company. Now when the riveted ring was pulled up, the tab was pushed in and folded back against the top of the can. This principal design is still used on canned beverages today.

Patent Drawing for the Sta Tab