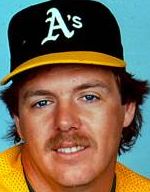 Steve McCatty was born in Detroit in 1954, but grew up in Troy and graduated from Troy High School in 1972. A tough and talented athlete, McCatty was an All-League, All-Detroit North and All-Oakland County baseball player. He made his major league pitching debut with the Oakland Athletics in 1977 and remained on that team for the next nine years.

In 1981 McCatty led the American League in wins with an ERA of 2.33. He threw 16 complete games, pitching nine or more innings in five of his first six starts. That year McCatty finished second to Rollie Fingers in votes for the Cy Young Award.

The following year the right-hander started experiencing pain in his upper right arm and shoulder. The speed of his fast ball dropped to the low 80s and his ERA rose to 3.99. Doctors diagnosed the problem as “rotator cuff syndrome.” In fact, Steve McCatty pitched the final four years of his career with a torn labrum (shoulder ligament) and a bone chip under the top of his bicep. “I’ll put it to you this way,” McCatty said in a 2012 Washington Post interview, “Every time I threw a pitch, I hoped they hit it. Because if they fouled it off or took it, that meant I had to throw another pitch.” McCatty retired as a player in 1986.1

Following a short career in the broadcast booth, McCatty turned to coaching, first in the minor leagues, and then for the Detroit Tigers (pitching coach 2003-05). On June 2, 2009 he replaced Randy St. Claire as the Washington Nationals pitching coach. This year will mark his seventh complete season with that team and his 19th year as a professional level pitching coach. Pitchers agree that behind his somewhat gruff appearance, is a humorous even-tempered pro who encourages players to develop their skills rather than reinvent their techniques.

In the off season Steve McCatty and his wife make their home in Oakland County and Steve teaches kids the art of pitching at Jason Thompson Baseball in Auburn Hills.